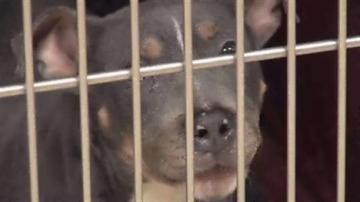 \"They're not meant to take in and house court case dogs or any other dogs for long periods of times,\" said Pam Holdermann, with Save Milwaukee Court Case Dogs.

\"MADACC was not meant to be what is happening to them right now,\" said Holdermann.

Holdermann says there are already many court case dogs in MADACC's care, with 22 more dog fighting victims coming in-- it's time for reform.

\"They take up a whole kennel that can't be used for other stray dogs,\" said Holdermann.

Holdermann has been working with Sen. Tim Carpenter to protect court case dogs.  Sen. Carpenter introduced a bill that would help move the animals from MADACC to rehabilitation faster.  He said in a statement-- \"While I am disappointed that the legislature did not pass my dogfighting bill this session, I will continue to fight next session to help stop the abuse of animals.\"

\"The law cenrtainly doesn't allow for you to say well you've been arrested for dog fighting, we're going to take your dogs away,\"  said Holdermann.

Holdermann says this is one of many reasons wants lawmakers to take action.

\"The law also says the dogs should be humanly disposed of, and that is wrong,\" said Holdermann.

The animals are being kept as evidence in a criminal investigation-- we called MADACC to ask for an interview, but they deferred all inquiries to police due to an ongoing investigation.