An Ocean "Unicorn"? Giant Shipworm Seen for the First Time 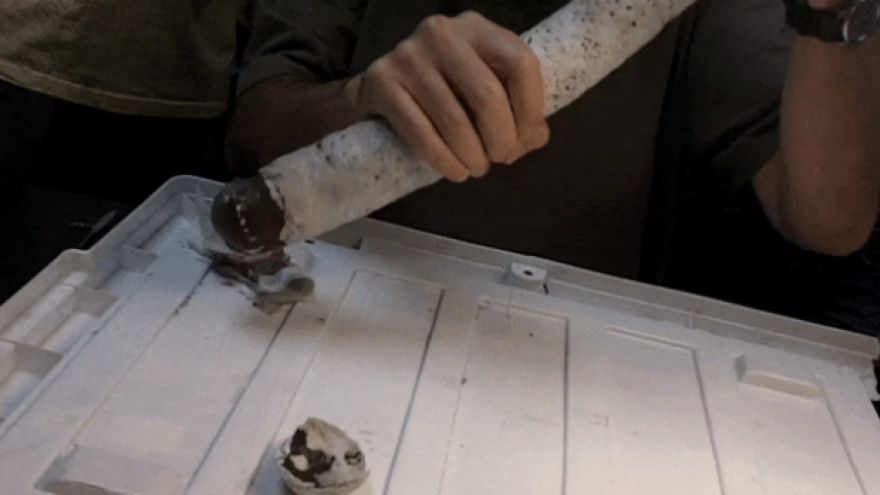 (CBS NEWS) An enormous, worm-like mollusk called a shipworm that inhabits a shell resembling an elephant’s tusk was recently seen for the first time ever.

The animal’s long, tubular shells — which measure 3 to 5 feet in length — were discovered centuries ago, but no one had ever glimpsed the creature that made the shells. However, researchers recently spotted a group of the giant shipworms, called Kuphus polythalamia, in documentary footage showing a shallow marine bay in the Philippines. The creatures were buried vertically in mud, and the scientists suspected they were seeing the first examples of giant shipworm shells with shipworms still inside.

They retrieved five specimens from their muddy home and carefully extracted the living animals. Removed from its shell, the average shipworm’s body is a long stretch of glistening black flesh that forks at one end, where it emerges from the mud. They measured about 3 feet (1 m) long — approximately as long as a baseball bat. [The 12 Weirdest Animal Discoveries]

Elusive since the 18th century, the giant shipworm was “a unicorn for marine biologists,” study co-author Margo Haygood, a research professor in medicinal chemistry at the University of Utah College of Pharmacy, said in a narration for a video showing the removal of one of the shipworms from its protective shell.

And once the scientists had the opportunity to examine one of these giants, they discovered how unusual this “unicorn” truly was, study co-author Dan Distel, a research professor with the Marine Science Center at Northeastern University, told Live Science in an email.

Shipworms earned their name from their wood-eating habits, as they are notorious for infesting and consuming wooden ships. Records dating to 412 B.C. describe sailors protecting their boats against shipworm invasion by coating the wood with a mixture of oil, sulfur and arsenic. And logs belonging to a 15th-century vessel from Great Britain describe a layer of lead as a defense against shipworms, “which many times pearseth and eateth through the strongest oak that is,” according to a study published in 1973 in the journal Marine Fisheries Review.

These peculiar creatures are bivalves, belonging to the group that includes mussels, clams and oysters. Unlike the majority of bivalves, most shipworms have elongated, naked bodies, with their shells reduced to small plates alongside their heads and used for boring into the wood that they eat, the 1973 study reported.

But the giant shipworms, which are encased in massive shells and were found to have greatly reduced digestive organs, use a different survival strategy, scientists said in the new study.

Instead of living in a piece of wood that they consume, the enormous worms bury themselves in marine mud, and they survive through the activity of special bacteria that live in their gills. As the worms filter the water — which is chock-full of rotting wood — the bacteria process hydrogen sulfide produced by the decaying wood and plant material, using it as the fuel for a chemical reaction that results in nourishing organic carbon, the scientists wrote in the study.

Most shipworms measure just a few inches in length, because they can’t grow larger than the piece of wood they inhabit — they can’t move to a new piece of wood if they outgrow the first, so if they grow too big, they would starve to death, Distel told Live Science.

But K. polythalamia, which lives in mud, has no such restrictions, he said.

“There is not much to limit their growth, and they have a pretty unlimited source of energy from diffusing sulfide. It is also possible that their sulfur symbiosis provides them with plenty of nutrients and energy, allowing them to grow faster and larger than their relatives,” Distel said.

It may have taken several centuries to track down these unusual shipworms, but now scientists can finally begin to unravel the mysteries of their unusual biology, life cycle, and their symbiotic relationship with the still-undescribed bacteria that live in their gills and make their food.

“Everything about these creatures is weird and surprising,” Distel said. “We have only just started to uncover its secrets.”

The findings were published online April 17 in the journal Proceedings of the National Academy of Sciences.