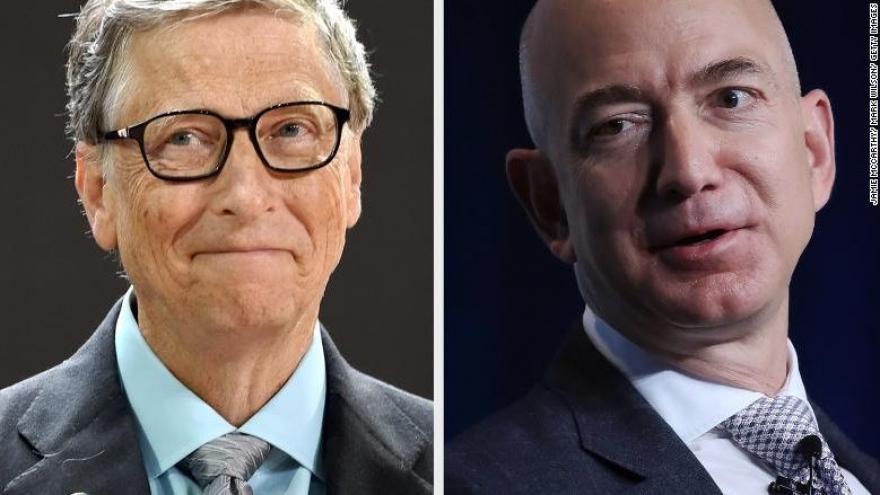 (CNN Money) -- Jeff Bezos has leapfrogged Bill Gates again for the title of world's richest billionaire. But they're both having a pretty good day.

Amazon stock jumped 13.5% on Friday after the company turned in another incredible earnings report -- more than a quarter-billion dollars in profit in three months.

Bezos owned nearly 80 million shares in Amazon (AMZN, Tech30) as of August, according to the most recent available data from FactSet. He made more than $10 billion from the one-day stock surge and is now worth well over $90 billion.

At the end of trading on Thursday, Gates occupied the top spot in the Bloomberg Billionaires Index, with a net worth of $88 billion. Bezos had $83.5 billion, and his big day on Friday was more than enough to close the gap.

But Gates also got a boost as Microsoft (MSFT, Tech30)stock rose 7%. Gates owned 103 million shares as of September, according to FactSet. Microsoft stock climbed about $6 a share, so Gates added almost $600 million to his personal wealth.

A long-term plan to create a world-class, centralised healthcare system in the UAE.

Bezos briefly dethroned Gates once before, on July 27, when his net worth topped $90 billion because of a temporary surge in Amazon stock.

Amazon has been on a tear this year. It acquired Whole Foods and plans to establish a second headquarters somewhere in North America. More than 200 cities and regions have submitted bids to become the home for HQ2.