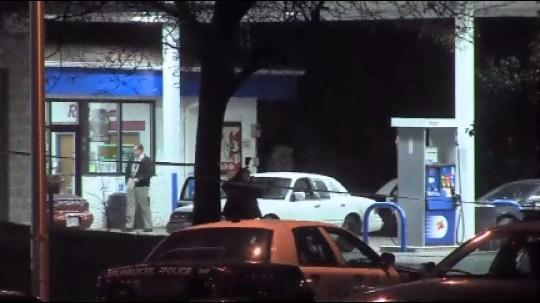 Milwaukee police believe a 22-year-old man who died inside a gas station on the city's northwest side is the perpetrator that led to a double shooting.

They say a 30-year-old Milwaukee woman was shot by the man during what's believed to be a failed robbery attempt.

She was taken to the hospital and is expected to survive.

Police said both of them were wounded shortly after 10 p.m. Thursday night in the 8900 block of N. 95th Street.

After the Milwaukee man was shot, officers said he ran to a nearby gas station at 95th and Brown Deer Road.

Surveillance video obtained by CBS 58 shows the man coming inside the gas station for help and then he collapses.

The clerk who was working described what happened before he called 911.

\"I was taking a customer and then one guy came and he said that there was shooting, some shooting going on outside,\" said Muhammad Mateen. \"So then I go and look and the guy was coming from the parking lot and he had blood in his mouth and everything and then I opened [the] door for him and he come inside and just lay down.\"

The video also shows customers trying to help the man.

Police say firefighters also tried to save his life when they arrived, but the man died on the scene.

It is unclear who shot him and police have yet to release their identities. The investigation into this case is ongoing.
Share this article: