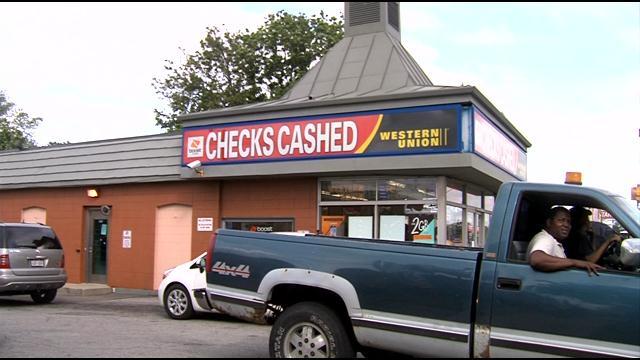 The man in custody for allegedly shooting and wounding a Wauwatosa detective on Friday is now charged, with an alleged accomplice, in an armed robbery that happened three days earlier.

Najee Harmon is still  in jail while his charges related to the officer involved shooting are pending, but in the meantime, we now know just days before he reportedly held a woman in her car at gunpoint demanding cash.

Milwaukee Police Chief Ed Flynn called it a \"serendipitous meeting;\"he says when Wauwatosa police questioned Najee Harmon about a burglary on Friday, they had no idea he was involved in a dangerous robbery just days before.

This is Simione Parks. Milwaukee police say on June 16th, he and Harmon went to this check cashing store.

Police say surveillance video shows, when they two left the store, Harmon got into the back seat of another vehicle, putting a gun to a the neck of a woman sitting inside, demanding the car keys, which she didn't have.

According to reports, he then said \"I want all the money or I'm going to shoot you.\"

After she handed over her wallet, Harmon and Parks took off..

\"We know he was dangerous, the last time he was encountered he had a semi-automatic pistol that he's certainly exhibited a willingness to use,\" said Flynn.

But Tosa police were questioning him about a different crime.

\"It's all related to a couple burglary situations were dealing with in Wauwatosa,\" said Wauwatosa police.

\"When they encountered this individual he opened fire,\" said Flynn.

Meanwhile, the investigation into his possible  involvement with that wauwatosa burglary continues.