All Employees Safe after Franklin Fire 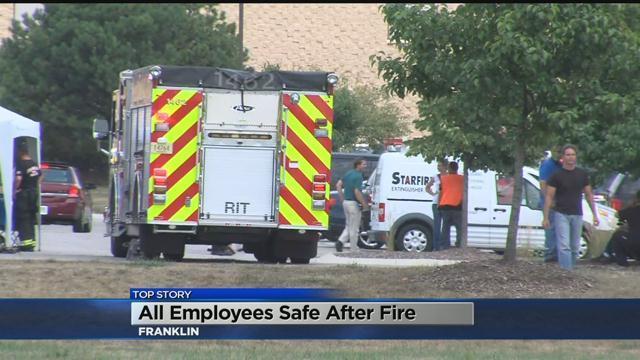 Crews were still on the scene at S&C Electric Company on Wednesday around 5:00 PM.

Fire trucks were still on scene. A few hours earlier firefighters were on the roof and circling the building.

Thick, black smoke poured out of the building for many hours. The company provides equipment and services for electrical power systems. It was not disclosed what type of chemicals were inside the building, but hazmat crews were on scene.

An employee CBS58 spoke to earlier today says everyone was evacuated from the building safely. That same employee was able to leave, and brought water to his colleagues.

"When we got the all clear from the facilities supervisor if your car was parked in an area that wouldn't interfere with the firefighting process you could leave there were many people that couldn't so I went down the road to get some water for the people that had to stay in a nice hot parking lot," said Anthony Elliott.

Those at S&C Electric were not the only ones whose work day was affected.

A nearby business who says authorities told them no one could leave the building or a period of time. Emergency personnel didn't want the employees breathing or inhaling what was outside. The business also rerouted their a/c system to recirculate air in the building so it wouldn't bring any air from the outside in.

CBS 58 was told Franklin Fire Department was a little short staffed on this fire. They were not able to comment on scene.

S&C Electric released a statement said, “Our team followed strict safety protocols and quickly evacuated all team members; we are grateful that no injuries resulted from this incident and are thankful to the local fire department and emergency response teams for their quick action and continued support.”