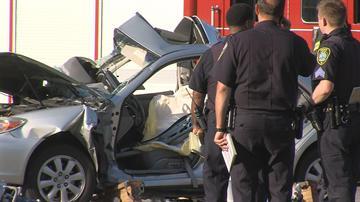 \"I would rather get on a bus sometimes even if I do have a car,\" Jemison said.

The night before, Jemison was one of dozens who witnessed a deadly crash on Sherman and Burleigh.

\"Everybody was terrified because the car was so crushed,\" Jemison said.

A 62-year-old woman driving east on Burleigh ran a red light, smashing into several cars.  The crash killed 52-year-old Christine Jaeger, 45-year-old passenger Lisa Cope and sent two others to  the hospital.  Police arrested the driver they think is responsible.  She could be charged with homicide by negligent use of a vehicle Monday.

Payton saw it happen right in front of him.  Both men were sad, but not surprised speed played a factor.

\"They're showing off for other people,\" Jemison said.  \"Really, everyone wants all that speeding stuff to stop because there's too many kids out here.\"

\"Obviously there's some personal responsibility that we all need to take,\" Alderman Willie Wade said.

Wade wants to work with Milwaukee leaders to fix the problem -- suggesting  the city reduce Sherman Boulevard traffic to one lane in each direction.  But the alderman knows speeding happens all across town.

\"We don't want to just fix Sherman and the same problem shows up on 51st Street or 60th Street,\" Wade said.  \"So, we're trying to be more scientific about the approach.\"

Wade says police and his plans can only do so much to slow people down, adding drivers need to change their  behavior.

Wade says any changes to Sherman Boulevard would take some time.  Ultimately, he hopes the people who live there approve the changes themselves.