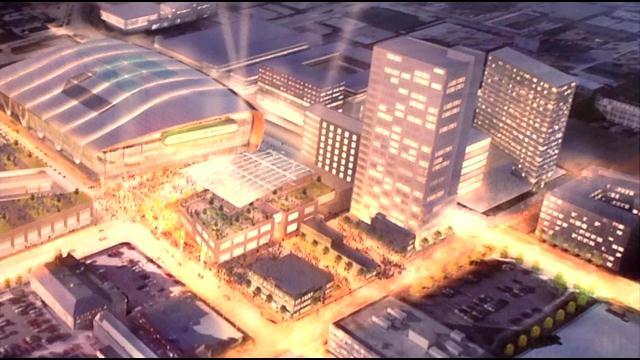 It sounds simple enough: a one-percent sales tax increase Milwaukee Alderman Bob Bauman says would make up for dwindling state support of a new Bucks arena. But in a city still torn over an ongoing Miller Park Stadium Tax (0.1 percent implemented in January 1996), Bauman knows his plan could be a tough sale.

\"You cannot get blood from a turnip,\" Bauman said Thursday morning at City Hall. \"The city simply doesn't have the financial tools to come up with the kind of money being called for.\"

Bauman's plan would boost Milwaukee County sales tax to 6.6 percent -- by far the highest in the state -- generating approximately $125 million a year.

A portion of the taxes ($18.75 million) would pay for a new Bucks arena and eliminate a need for any state contribution. Bauman's plan would generate $250 million for the arena. The rest of the tax would help pay for ongoing arena maintenance and also go toward funding county parks, the transit system and cultural assets like the zoo. The plan puts $25 million to parks operation and management, $18 million into transit and $11 million for cultural assets each year.

\"While there would be an increased sales tax, there would actually be a significant reduction in the Milwaukee County property tax levy of some $50 million,\" Bauman said of the money provided for parks and transit.

Approving a new tax needs to pass the state legislature first. State lawmakers could eventually send the plan to a voter referendum in an upcoming election.

Fitzgerald says lawmakers haven't abandoned the capitol chipping in up to $150 million, possibly through a loan from the state Board of Commissioners of Public Lands. But Fitzgerald admits the governor's original \"jock tax\" plan won't work.

\"As soon as we have a deal, we have a deal and we're hoping to meet with the city and county,\" Fitzgerald said. The senator says he and other lawmakers have a meeting with Milwaukee leaders before April ends.

\"There's other ideas in the works and this is a distraction,\" Milwaukee County Board Supervisor Deanna Alexander said of Bauman's plan.

Alexander appreciates Bauman's idea, but says she would put her foot down on anything that raises taxes \"indefinitely\", as the alderman's tax would be.

\"I don't want to see that happen,\" Alexander said. \"I don't think the people of Milwaukee County want a never-ending bill for everything. But I think there's room to talk about it here and look at what the possibilities are.\"

Bauman says his plan wouldn't be like Miller Park's stadium tax, which he says was force-fed to area counties, because it would go to a referendum. Still, the alderman knows many area leaders like County Executive Chris Abele don't want to raise taxes. \"If ideology gets in the way, then the Bucks will probably be in Seattle in three years,\" Bauman said.

Both Alexander and Fitzgerald alluded to possible plans in the works with the city, county and team, but neither would go into details yet.  County Executive Chris Abele's office told CBS-58 news it had no comment at this time.