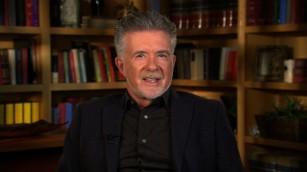 (CNN)Alan Thicke, the beloved TV actor who epitomized the role of the sitcom dad, died Tuesday at age 69, his agent told CNN.

"Today the world lost an amazing talent," said Tracy Mapes with Imperium 7 Talent Agency. She did not provide details regarding the cause of death.

His ex-wife, singer and actress Gloria Loring, confirmed his death in a statement on Facebook.

"It is a shock. We were all just together for Thanksgiving. He was talented, funny and deeply devoted to his family. Rest In Peace, dear one."Thicke's career spanned five decades -- one in which he played various roles on and off screen, from actor to writer, to composer to author.

But he will be remembered most for his role on "Growing Pains," the hit sitcom featuring his character of Jason Seaver. In the role, Thicke portrayed a corny and collected TV dad who offered wholesome life advice to his family during the 1980s.

The sitcom launched the careers of Thicke and the actor who played his son, Kirk Cameron. As Jason Seaver, a psychiatrist who worked from home, he perfected the role of concerned and caring dad, always quick with advice and reassurance, often in the form of cheesy zingers.

As news of his death spread fans of a certain age mourned the loss of a father figure, recalling lyrics from show's theme song: "Don't waste another minute on your crying."Thicke went on to appear in numerous television shows and films, often appearing as himself in shows, including "How I Met Your Mother." He recently appeared on Netflix's "Fuller House," a reboot of another 1980s sitcom, featuring Bob Saget and Kirk Cameron's real-life sister, Candace Cameron Bure. Some of the last tweets on Thicke's Twitter account referenced the show.

"So sad is the passing of Alan Thicke. Such a good husband, father, brother, and friend. He will be deeply missed. Rest in peace dear Alan," Saget said on Twitter.Thicke was born in Ontario, Canada, in 1947. He began his career in Canadian television before moving behind the scenes in American television.

In the 1970s he wrote for "Fernwood 2-Night," a short-lived satirical talk show that later became "America 2-Night," and "The Richard Pryor Show." He composed the theme songs for the game show "Wheel of Fortune" and sitcoms "Diff'rent Strokes" and "The Facts Of Life."

He helmed a Canadian talk show, "The Alan Thicke Show," in the early 1980s but he failed to replicate that success with American audiences on "Thicke of the Night."However, he continued to remain popular in Canada, recently earning a "Canadian Icon Award" to honor his influence outside his native country. It wasn't just his acting he brought to the US, it was his love of hockey, so much so that celebrities and pro hockey clubs alike noted his obsession with the sport alongside their expressions of condolence.At the low point of his career, he landed his most memorable role in "Growing Pains."

The role was his saving grace after the failure of "Thicke of the Night," he told CNN's Larry King in 2006, when the cast reunited for a television special. If not for the role he may have been driving the Zamboni for the Los Angeles Kings hockey team that year, he said. (Even if he was joking, his love and loyalty for the sport of his homeland was well documented.)

"Loved it. Proud of it. Proud of what it stood for. I share the corny family values espoused on that show," he said in a 2010 interview with A.V. Club. "It was a great opportunity that made my life good and something that I can show to my 12-year-old now in reruns. Corny and dated as it is, it's still relatable, understandable, and he can look at it and say 'Yeah, I get it. Now I see what you did before I was born.' "

"So if that's what goes on my tombstone, I'm perfectly comfortable with it."

He is survived by his sons Brennan, Carter and "Blurred Lines" singer Robin, as well as wife Tanya.

In the wake of Alan's death, Carter remembered his dad, not as the television father, but as a "best friend and my idol"

"[T]he world lost one of it's finest," Carter tweeted. "You are a legend and I love you Pops. Until next time."