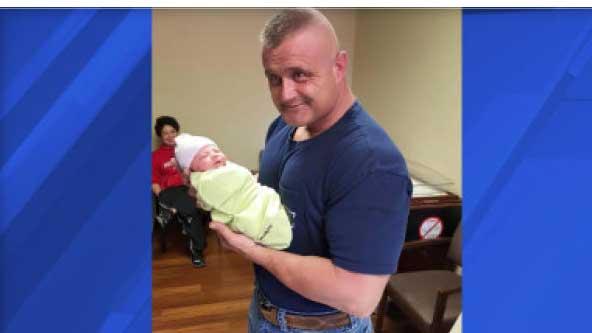 ATHENS, Ala. (CBS NEWS) - Expecting to write up a ticket for speeding, an Alabama State Trooper ended up helping a woman give birth.

Danny Lowe, of Huntsville, said he was driving his wife, Shawna, and their unborn baby to an Athens hospital Sunday morning around 6:40 a.m. when he was pulled over by Trooper Michael Kesler for speeding, news outlets reported.

While being questioned, Shawna Lowe began going into labor and the two men helped her deliver a baby boy along U.S. 72.

"He was awesome," Danny Lowe said, of the trooper. "He settled me down."

After delivering the baby, Kesler helped clean the baby and keep the mom and baby warm until an ambulance arrived.

Secretary of Law Enforcement Spencer Collier said in a news release that Kesler also helped take stress off the family by coordinating with the mother's doctor and ambulance personnel.

Kesler later joined the family at the hospital and gave them flowers, cupcakes and a starter kit for new parents.

"Trooper Kesler's actions today exemplify the mission of the Alabama State Troopers - to serve and protect," Collier said. "I want to personally commend Trooper Kesler for his swift actions and going above and beyond the call of duty."

Danny Lowe said his baby boy and his wife are doing well.