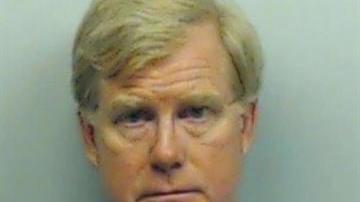 (CNN) -- Alabama lawmakers are calling on U.S. District Judge Mark Fuller to resign over allegations that he hit his wife \"several times with a closed fist\" in an Atlanta hotel room in August.

U.S. Sens. Jeff Sessions and Richard Shelby of Alabama released separate statements Thursday calling for Fuller's resignation. Shelby said Fuller has \"lost the confidence of his colleagues and the people of the state of Alabama.\" Sessions said Fuller's \"unacceptable personal conduct violates the trust that has been placed in him.\"

According to a police report obtained by CNN, Fuller's wife, Kelli, suffered \"lacerations to her mouth and forehead\" in the August 9 incident at the downtown Atlanta Ritz-Carlton hotel.

He also grabbed his wife \"by her hair, pulling it out,\" the report says, leading her to suffer \"bruises on her ankle, thigh and knee from being dragged.\"

Fuller's wife was \"treated on scene by (paramedics) but refused to be transported to the hospital,\" according to news release from the Atlanta Police Department.

Fuller spent the night an Atlanta jail after being charged with misdemeanor battery in the alleged domestic violence incident. Earlier this month, he accepted a pretrial diversion without having to admit guilt. The program, typical for first-time domestic dispute offenders, involves a substance abuse assessment and counseling.

Fuller's wife was heard on 911 calls telling dispatchers, \"Help me, please. Please, help me. He's beating on me.\" She agreed to the terms of the pretrial diversion.

Following his acceptance into the pretrial diversion program, Fuller said in a statement to CNN, \"I deeply regret this incident and look forward to working to resolve this issue with my family, where they should be resolved. I look forward to completing the family counseling that I voluntarily began several weeks ago and to successfully completing the requirements of the diversion.\"

\"If an NFL player can lose his job because of domestic violence then a federal judge should definitely not be allowed to keep his life-time appointment to the federal bench,\" she said in a statement.

Sewell said she would support moving forward on an impeachment if Fuller doesn't resign.

Fuller's attorney said calls for his client's resignation are \"unwarranted\" and said drawing conclusions between Fuller and the \"Ray Rice case ... represents a failure of critical thinking.\"

Immediately following Fuller's arrest, all of his cases were reassigned to other judges, his attorney Barry Ragsdale told CNN, and \"no cases are coming to him.\"

His return to the bench is \"all dependent on when the 11th circuit court investigation is done,\" Ragsdale said.

Fuller was confirmed to the U.S. District Court for the Middle District of Alabama in 2002.