Airline: 'Emotional support' pig kicked off flight for being disruptive 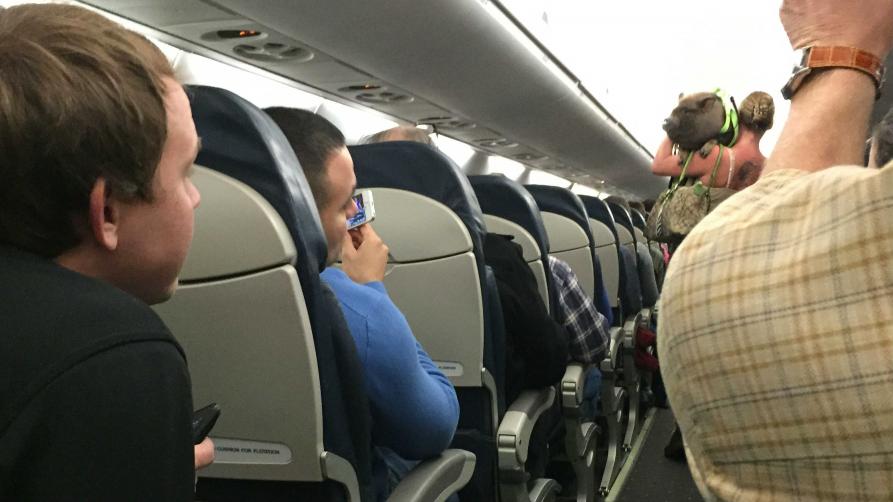 When US Airways passenger Robert Phelps first saw the woman coming down the aisle of the plane, he thought she had a \"really big dog\" or a stuffed animal thrown over her shoulder.

It was about 6:10 a.m. the day before Thanksgiving, and Phelps was waiting to take off from Connecticut's Bradley International Airport for Washington. He thought it could be a service animal, but service animals are usually in crates, he thought to himself.

As she got closer, there was no denying that the woman was carrying a big brown pig, perhaps between 70 and 80 pounds, Phelps said.

\"Everybody was trying to surmise what it could be, because no one thought it was a pig,\" he said. \"Other than a Fellini movie, where would you see a person with a pig?\"

The passenger was allowed to bring the pig on board as an \"emotional support animal\" under Department of Transportation guidelines, a US Airways spokeswoman said.

Apparently, it was not mean to be. Before the plane took off, the passenger and her pig were kicked for being \"disruptive,\" spokeswoman Laura Masvidal said.

How disruptive? Fellow passengers told the Hartford Courant that the big brown pig stank up the cabin of the tiny D.C.-bound aircraft and defecated in the aisle.

Phelps watched in amusement and horror as the pig began \"dropping things\" in the aisle while his owner stowed her belongings. When she tied him to the armrest and tried to clean up after him, he began to howl.

\"She was talking to it like a person, saying it was being a jerk,\" he said. \"I have no problems with babies, but this pig was letting out a howl.\"

A flight attendant asked her to move to the front of the plane, and eventually she left, he said. He took a photo of her as she walked past him.

\"I understand dogs and cats on planes. They come in crates, but this was way too big, and it had no container,\" he said. \"It looked heavy. It was not a tiny, cute little pig.\"

Why was the animal allowed on the plane to begin with? People have been bringing \"emotional support animals\" on planes in numbers in recent years, as well as to restaurants, museums and stores.

In 2003, the Department of Transportation updated its policy regarding animals in air transportation (PDF) to say that \"animals that assist persons with disabilities by providing emotional support\" qualify as service animals.

It's up to airline personnel to determine whether an animal is a service animal. They can do so by seeking \"credible verbal assurances\"; looking for physical indicators on the animal, such as a backup or identification tag; or requesting documentation for service animals.

It is not clear whether the passenger on Wednesday's flight provided such documentation.