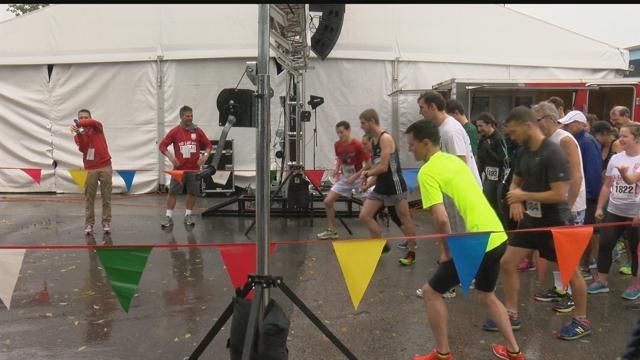 Runners, walkers and volunteers from across Wisconsin gathered in Milwaukee Saturday at the Summerfest Grounds to celebrate raising $377,352 to support HIV prevention, care and treatment programs throughout the state at the 27th AIDS Walk Wisconsin and 5K Run. Participants were joined by Broadway, film and television star, Taye Diggs, who served as the event’s Honorary Chair.

“I have believed this from a young age – people – all people – can help fight this disease,” Diggs said in his address to the crowd. “Not only do you all prove this today but I think you folks in Wisconsin are giving to me and others around the country hope for a more successful fight against AIDS and that is the kind of hope that triggers inspiration for the rest of the country to aim as high as you do.”

Introducing Diggs was ARCW President and Chief Executive Officer, Michael J. Gifford, who reminded the crowd exactly why they walk. “Tens of thousands of people are at great risk of HIV, thousands of people with HIV are either not in care or not succeeding in with their treatment and hundreds more are infected with the virus every year in Wisconsin,” said Gifford. He continued, “Because of you, people with HIV live longer in Wisconsin than anywhere else and we have among the lowest rates of new HIV infections in the United States.”

AIDS Walk Wisconsin recognized individual walkers and runners, and also awarded three unique team competitions that challenged groups to raise funds for HIV services. The winner of the Raising the Bar Challenge is The Strongest Link II, with Taylor’s Milwaukee bar, raising $6,821. The Raising the Bar Challenge is a friendly competition among bars and night clubs from across the state.

The top individual fundraiser this year is Michael Bersch from Lake Havasu, AZ who raised $16,265. A Wisconsin native, Bersch, who has participated in this event for 10 years, was celebrated on stage for crossing the $100,000 mark in cumulative funds raised.

AIDS Walk Wisconsin is produced by the AIDS Resource Center of Wisconsin (ARCW). ARCW is home to the ARCW Medical Center – Wisconsin’s largest and fastest growing HIV health care system. Through its integrated medical, dental and mental health clinics along with its pharmacy and dedicated social services that include food pantries, a legal program, housing support and social work case management, 3,500 HIV patients in Wisconsin gain the health care and social services they need for long-term survival with HIV disease from ARCW.