Admirals One Month Away from Returning to Panther Arena, Renovations Continue 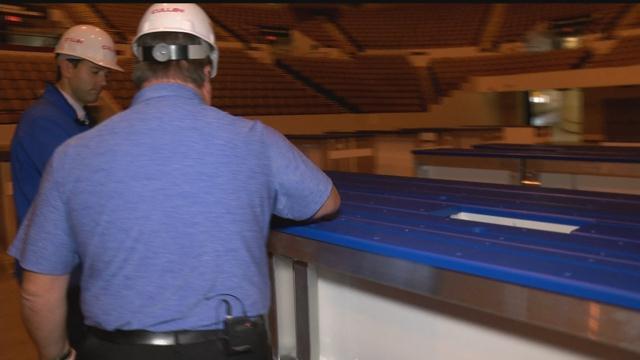 The Milwaukee Admirals are less than a month away from their home opener - but you might call it more of a homecoming.

The team's October 28 game will be the first back at UW-Milwaukee Panther Arena since the late 80s. At that time the venue was called the MECCA Arena.

Some major renovations were required to make sure the facility was ready for the Admirals. In the video above, the president of the organization takes CBS 58's Jacob Kittilstad on the tour of the space as it undergoes the transformation.

"Basically what they're doing in here is finishing of the replacement of the seats so now every single seat in this building is less than two years old," Jon Greenberg, Admirals President, said.

"One of our big goals was just to breath new life into this building. This is an awesome historic building where a lot of really neat things have happened over 65 years," Greenberg said.

But for the past 28 years Admirals hockey has been next door at the Bradley Center. Here's where things changed: the Admirals were not included in plans for the new Bucks arena - forcing the switch-up.

Panther Arena can seat about 9,500 while the Bradley Center could seat about double that. But people with the team said they think it could be a great thing for home games."

"I remember how loud is was, how fun it was, how you're on top of the game. And we want to be able to recreate that and really make this a home ice advantage for our team," Greenberg said.

38 hockey games are scheduled for Panther Arena this season. Upgrades are also being made to accomodate the Milwaukee Wave Professional Indoor Soccer Team as well as the Brewcity Bruisers: Milwaukee Roller Derby Girls.