Admirals fall 3-2 to Wolves in shootout 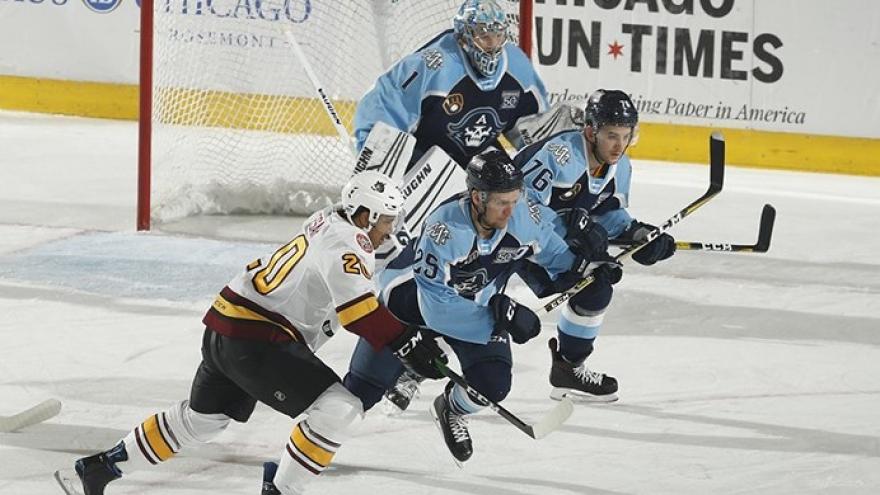 ROSEMONT, Ill. -- Patrick Brown scored two goals and added one in the shootout to lead the Chicago Wolves to a 3-2 shootout win over the Milwaukee Admirals Sunday at Allstate Arena.

The loss was Milwaukee’s third straight loss in a game lasting beyond regulation on the weekend. Milwaukee lost in a shootout Friday and in overtime Saturday. Still, the Admirals points streak was extended to five games (2-0-1-2).

After a scoreless overtime, Chicago’s Gage Quinney and Brown each scored in the shootout. Milwaukee’s Daniel Carr and Cole Schneider were stopped.

Chicago’s Brown scored a pair of goals in the second period to tie the score at 2-2. Brown’s first goal, at 11:54 of the second, was slapped in from the crease before Ads goalie Troy Grosenick could cover the puck. His second came on a delayed penalty against Milwaukee. Brown stood at the left post and tapped in a backdoor pass from Lucas Elvenes at 17:40.

Milwaukee scored a pair of goals in the first period and went to the locker room at the first intermission with a 2-0 lead. Schneider scored the first goal from between the circles at 7:50. Schneider deflected a shot from Alex Carrier and it bounced into the net past Wolves goalie Dylan Ferguson. Schneider’s second goal of the season was assisted by Carrier and Laurent Dauphin.

The Admirals took a 2-0 lead at 17:20 of the first period. With lots of traffic in front of Ferguson, Tommy Novak controlled the puck in the slot. He didn’t have a clear shot so he dropped the puck back to defenseman Jeremy Davies. Davies’s shot beat Ferguson to his stick side. It was Davies first professional goal. Novak and Mathieu Olivier earned the assists.

The Admirals travel to Grand Rapids Wednesday. Milwaukee’s next home game will be Fri., Oct. 25 when the Ads host the Texas Stars at 7 pm. The first 3,000 fans will take home a Alexander Hamilton Bobblehead, courtesy of Lee Jeans.

Fans can purchase tickets for the game at the team’s office, located at 510 W. Kilbourn Ave, from 9-5 on Friday. In addition, tickets can be purchased over the phone by calling Ticketmaster at (800) 745-3000 or clicking here. Tickets are also available at the Panther Arena Box Office.