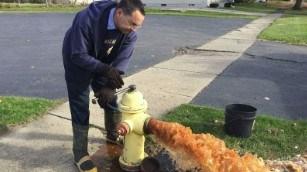 (CNN)The folks in Flint, Michigan, just can't seem to get a break.

Already using filters on their faucets to make their toxic water clean, they'll now have to boil it too.

Flint is under a boil-water advisory after a water main break on Tuesday. Water pressure went down and that may have allowed bacterial contaminants to enter the system.

"Bacteria are generally not harmful and are common throughout our environment," a statement from the city said.

The advisory is being called a precautionary measure and will be lifted once water sampling shows the water is safe to drink.The latest setback came as the mayor said she needs $55 million to remove lead pipes in the city. Karen Weaver is asking Gov. Rick Snyder to partner with her to get the funds.

"In order for Flint residents to once again have confidence and trust in the water coming from their faucets, all lead pipes in the city of Flint need to be replaced," Weaver said.

A spokesman for the governor said the office was reviewing Weaver's proposal.

"Gov. Snyder is including money in his budget request on Wednesday to address Flint water infrastructure," said Dave Murray. "That figure could be a starting point, but we won't know for sure until we are able to study the pipes that are in place now and know better what needs to be replaced and how quickly."

Deputy press secretary Anna Heaton said that the governor will ask the legislature for an additional $195 million in funding for the crisis. It's part of the budget plan for the 2016-2017 fiscal year he's expected to present to the legislature Wednesday.

Officials say $37 million already has been approved.But the people and water pipes of the city weren't the only casualties of the corrosive waters of the Flint River.

Damage is showing up in the city's fire equipment.

One pump has already been replaced because of severe rust. An invoice shows $65,000 in needed repairs.

"We actually called the manufacturers of three of our fire trucks and they gave us some ideas of how to combat that a little bit, but what's done is done and we're hoping it doesn't get to a point where we have to replace pumps," Fire Chief David Cox Jr. told CNN affiliate WJRT.Otherwise, things will really get expensive.

And one more thing to worry about.

The fire department is worried the water could be corroding the fire suppression systems around the city too, the affiliate reported. Sprinkler installation companies are being told to inspect systems installed in homes and businesses.