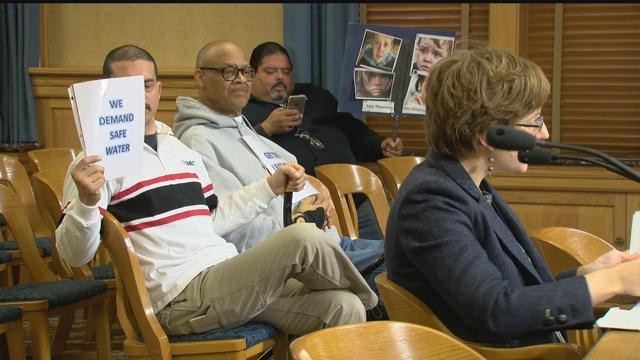 Members of the Freshwater for Life Action Coalition staged a silent protest Friday during the monthly meeting the Water Quality Task Force.

During testimony they held up various signs that were in plain view of task force members.

Some read "stop poisoning our children."

Coalition member Robert Miranda says they have major concerns that the recently announced distribution of filters will take away pressure to secure funding for removal and replacement of all old water laterals that are leaking lead into the water supply.

Miranda was a live guest Friday on the CBS 58 News at 4 p.m.

"We don't see the urgency to replace pipes or educate the public of the dangers," he told CBS 58 News. "The money can be found. This is going to be a 25 year project and we've even provided a formula to budget pipe replacement."

The coalition is made up of community members and was formed to bring neighbors on the south and north side of Milwaukee together. Other members include the NAACP and Black Health Coalition.

The city is working with United Way in funding the filters so families in the most need, with little means, can get the devices free.

The Health Department will distribute the devices and replacement filters through two agencies: the Social Development Commission on the north side; and the Sixteenth Street Community Health Center on the south.

Households with pregnant women and children under the age of 6 are strongly urged to take part in the program.

At the task force meeting, Alderman Jim Bohl said brass and other plumbing fixtures can also introduce lead into water.

Miranda said that was based on the experience of Madison when it addressed water concerns.

Miranda said replacing the pipes should still be a focus.

He's pleased that the city has a plan of attack when it comes to daycare centers, but still hasn't seen a clear vision to fund the replacement of lead laterals that serve tens of thousands of families.