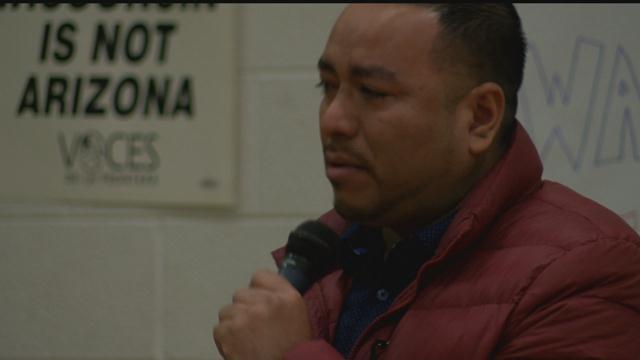 As local lawmakers consider two bills that some say target undocumented immigrants, the local activist group Voces de la Frontera is laying out its plan for 2016.

The group says their goal is to keep families together and immigrants safe. They say they will fight three bills proposed at the state capitol.

Assembly Bill 450 would require law enforcement to report undocumented immigrants charged with a crime to federal authorities. Republican John Spiros introduced bill 450 on Wednesday. He says it is supposed to put an end to sanctuary cities and make cities safer. Critics argue it could actually make it harder for police to do their jobs if people are afraid to call police for fear of being arrested. Spiros said at a public hearing Wednesday that the bill is not "anti-immigrant. Senate Bill 533 would block town and counties from issuing photo ID's. A public hearing for that bill is set for Tuesday afternoon at the Capitol. The group says they're also against a car-impound bill introduced by Representative Joe Sanfelippo.

At the assembly meeting held at the Ascension Lutheran Church in Milwaukee Saturday, talking about their struggle left some members in tears.

"He is a very strong man, and he said I know that strong men don't cry, but recounting how his wife had a very dangerous birth where he almost lost her and the baby..." said Christine Neumann-Ortiz, the Executive Director of Voces de la Frontera.

Neumann-Ortiz was translating an account at the assembly by Jose Flores. Flores and others at the assembly addressed the audience in Spanish. Flores explained an emotional story about a struggle he had where being undocumented him put his family in danger.

"After the operation she needed pain medication, and they were not able to get the pain medication because of him and her not having legal status in this country despite living here for over a decade," said Neumann-Ortiz as she continued to account Flores' story.

Flores has already gained national attention in the media, when he and his daughter, Leslie, confronted Governor Scott Walker on the campaign trail in July. Thirteen-year-old Leslie asked Walker why he was blocking DAPA and tearing her family apart.

Flores said Leslie is always with him in his fight.

"She knows what's going on. She knows I qualify for DAPA and DACA, daca and she fights for us and other immigrant people too," said Flores.

"The importance to continue in the struggle -- that's what he told his three-year-old and his eleven-year-old when he cried; that he felt that frustration to not be able to help his wife and his newborn baby. That this is why we fight," said Neumann-Ortiz.