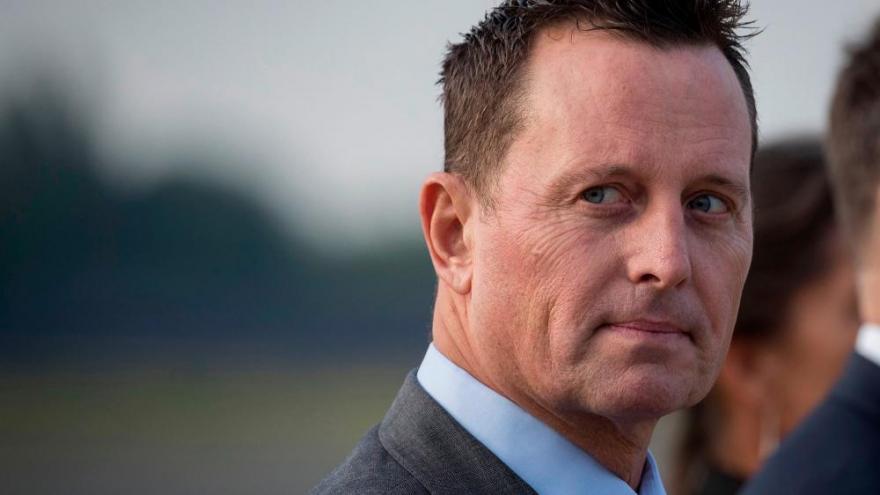 Acting Director of National Intelligence Richard Grenell shared a meme that appeared to mock the enforcement of stay-at-home orders in the US despite the overwhelming consensus of public health officials that such measures are crucial to slowing the coronavirus' spread.

(CNN) -- Acting Director of National Intelligence Richard Grenell on Monday shared a meme that appeared to mock the enforcement of stay-at-home orders in the US despite the overwhelming consensus of public health officials that such measures are crucial to slowing the coronavirus' spread.

On his Instagram account, Grenell posted the meme that features an image of the US Constitution with the caption "signed permission slip to leave your house."

That message directly contradicts recommendations put forth by public health experts and government agencies -- including Grenell's own office.

The Centers for Disease Control and Prevention has been urging "social distancing" -- defined as "remaining out of places where people meet or gather" and "avoiding local public transportation" -- even if you don't have any symptoms of the virus as a way to slow the spread of the disease.

In response, the Office of the Director of National Intelligence told CNN last the month they were "reducing staff contact through a variety of options including staggered shifts, flexible schedules and social distancing practices."

"These actions are being implemented to maintain the safety, security and health of the ODNI workforce while continuing to meet mission requirements," the office said.

Currently, 97% of the country's population is currently under stay-at-home restrictions.

Later on Monday, Grenell stated on Twitter that the post meant he "is a fan of the constitution."

When the Office of the Director of National Intelligence was asked for clarification about Grenell's thinking on the stay at home orders and CDC guidelines, a spokesperson replied, "He said his post means he is a big fan of the Constitution."

Grenell was unexpectedly tapped for his role in February while serving as ambassador to Germany.

His resume -- or lack thereof, when it comes to intelligence -- and reputation as a fierce loyalist to President Donald Trump is anything but standard fare for a director of national intelligence, even one who is serving in an acting capacity and is expected to be a temporary fill-in as the President tries to confirm a permanent intelligence chief.

A former administration official called Grenell's appointment "a troubling development" given the ambassador's lack of intelligence experience and his track record.

"He tended to freelance on policy matters and he strayed from many of the directives he got from Washington," this former official said.