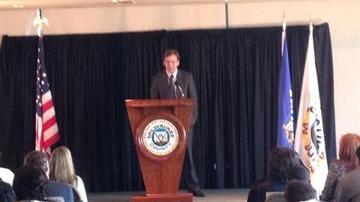 MILWAUKEE -- Get rid of the 'bus barn'. That's what county executive Chris Abele wants to do. He's referring to the transit center on Lincoln Memorial Drive. Abele was upbeat about progress during his tenure.

He jumped right into the Couture project during his state of the county speech.

Abele highlighted the project as one way the county is moving forward under his leadership.

The forty-four story hotel and apartment building would be on of the new lakefront features.  Abele also noted Northwestern Mutual's decision to building a brand new office tower downtown as a way the city and county are moving ahead.

\"The fact that it's taken a long time is frustrating,\" Abele said.  \"The fact that we had to change state law to allow It to happen is frustrating. But what's exciting is we are going to have one of the biggest towers in forty years built right over there. It's going to create thousands of jobs, millions to the tax base, I think it's a hell of a statement too.\"

Abele also said the courthouse fire costs will not come from any tax dollars -- something he hoped for. He also hit on mental health oversight, regional cooperation, among other topics.