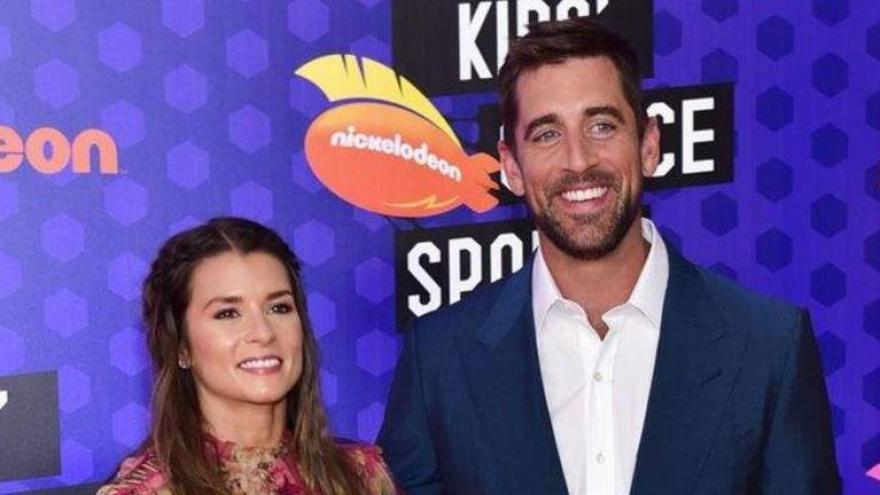 And here's the photo Patrick posted with the message.

Rodgers went the same route but he posted a few more photos.

“We met at the ESPYs in 2012. We both remember meeting each other, it was quick,” Patrick said, via People.com. “I got his email address, and I remember thinking to myself, ‘Oh, not a phone number? Just an email address?”

Patrick went on to say they would keep in touch periodically, but it wasn't until recently they connected consistently.

“We kept in touch a little bit, and there were some years we didn’t talk to each other, and then some every now and again, but it wasn’t until obviously recently that we actually had phone numbers,” Patrick recalled. “We referred to each other as Chicago and Green Bay — it was very cute.”

Patrick retired from professional racing last year. She now plans to shift her career to the business of her personal brand. She holds the record for the highest finish for a woman in the Dayton 500 and the Indianapolis 500. With the extra time Patrick had last year, she attended a few Packers games.

"I can't wait to go to Lambeau," Patrick said to Andrew Hussey of USA Today last year. "I was a Bears fan (but) I've known Aaron for quite a while and I've always told him I would cheer for him. As I've said before, I cheer for him, I just don't want his team to win. Now, of course, I cheer for the whole team."

Back in October, Rodgers talked with NBC's Michelle Tafoya for Artful Living and one of the things he talked about was his relationship with Patrick. Rodgers told Tafoya that he and Patrick are in love with each other.