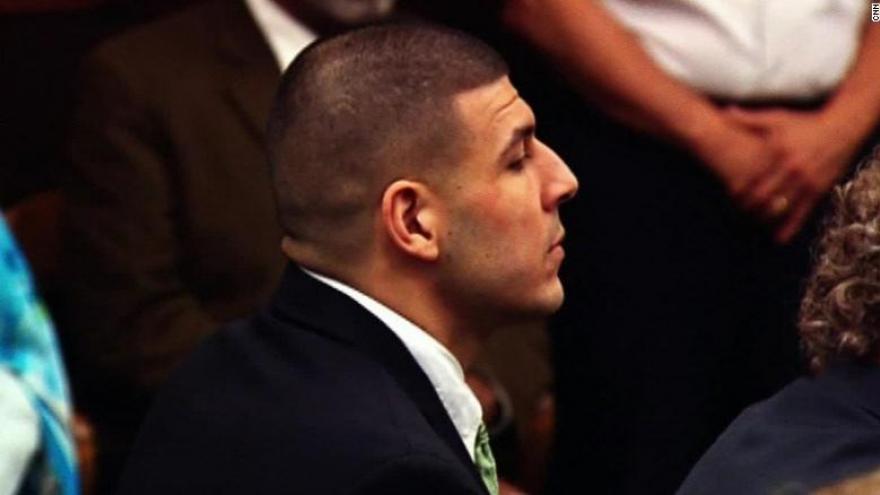 (CNN)Aaron Hernandez was found not guilty of two counts of murder on Friday in the killing of two men in a drive-by shooting outside a Boston nightclub in July 2012.

The former NFL star faced eight counts in all, including two of murder and a charge of witness intimidation for allegedly shooting his former friend in the face in an attempt to silence him.

Hernandez was found guilty of just one count: illegal possession of a firearm.

Hernandez's promising football career as a tight end with the New England Patriots fell apart in June 2013 when he was arrested in the murder of Odin Lloyd, the boyfriend of his fiancée's sister. Hernandez was found guilty and sentenced to life in prison without the possibility of parole in 2015, though he has appealed for a new trial in that case.

Jurors, who began deliberations last Friday, were instructed not to consider Hernandez's prior conviction in this double-murder trial. Hernandez did not testify in either trial.

Despite Hernandez's prior life sentence, legal experts said this double-murder trial still mattered for him personally -- and for the justice system.

The prosecution's case was light on forensics, and relied heavily on testimony from former friend Alexander Bradley, who said he was with Hernandez during the fatal shooting.

Bradley, who received immunity to testify, said that Hernandez became angry one night out when a man bumped into him at a nightclub and spilled his drink. Later that night, Hernandez ordered Bradley to drive up next to that man's packed vehicle at a stop light.

Hernandez leaned across Bradley and fired five shots into the other car, Bradley testified. Two immigrants from Cape Verde, Safiro Furtado and Daniel de Abreu, were killed in the shooting.

In closing statements, prosecutors presented Hernandez as a cold-blooded killer who committed an act of "senseless violence" by firing into a packed car.

"That killer took pleasure in what he did that night," Patrick Haggan, the lead prosecutor in the case, said. "He wanted his victims to see it coming."

After the shooting, Bradley sped away from the scene and he and Hernandez agreed to keep their mouths shut about the killings, Bradley said.

Investigators had few leads and the case went cold. A month later, Hernandez signed a $40 million contract extension with the New England Patriots

Bradley and Hernandez remained close friends until a violent falling out months later at a party in Florida. Hernandez had become extremely paranoid, Bradley testified, and he began to believe that Bradley could not keep the shooting a secret.

After a night out in February 2013, Hernandez shot Bradley between the eyes and left him in a parking lot to die, Bradley testified. Bradley survived but lost his right eye, and he vowed revenge on his former friend, he said.

Bradley's credibility -- or lack thereof -- played a major role in the trial. Defense attorney Jose Baez repeatedly called him a liar and a violent criminal who had made up the story to protect himself. Baez mockingly called Bradley's immunity agreement the "deal of the century."

"This guy has an incentive, and all of this is lies," Baez said in closing statements.

On the stand, Bradley admitted to a long history of sometimes-violent drug dealing over more than a decade. He is currently imprisoned for shooting up a club in Hartford, Connecticut in an unrelated incident.

Prosecutors presented some evidence that contradicted parts of Bradley's testimony. However, they argued that those "minor inconsistencies" proved Bradley told what he believed to be the truth, rather than a version of events put together by prosecutors or police.

Bradley, prosecutors argued, brought the story together but was not the only evidence in the case.

Investigators found the "murder car," a silver Toyota 4Runner with Rhode Island plates, hidden away at Hernandez's cousin's home. The "murder weapon" was found on a person connected to Hernandez as well, prosecutors said, and cell phone experts said Hernandez's phone was nearby at the time of the shooting.

Finally, prosecutors pointed to Hernandez's tattoos as confessions of the crimes. One of his tattoos was a gun similar to the murder weapon with exactly five bullets, the same number as were fired in the 2012 shooting.

Another tattoo was a head-on view of a gun, similar to what Bradley would have seen before he was shot. Next to both of those tattoos was a scrawl of text reading "God forgives."

"That is not random. That is not art. That is evidence," Haggan said. "That is a confession."