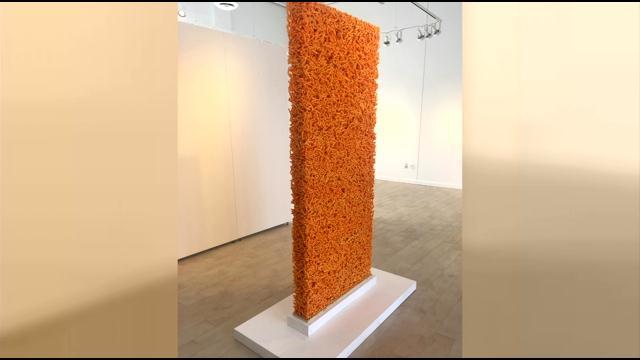 Fans of the art have the opportunity to see a unique display of Cheetos at the Thelma Sadoff Center for the arts in Fond Du Lac.

The artist Mike Womack transported the Roadcut Exhibit to the center in April from Austin, Texas.

The exhibit, which is 300 pounds of Cheetos glued together stood tall until late May when it fell over and crashed into pieces.

According to the Executive Director at THELMA Kevin Miller, the fall was all part of the plan.

The fall was captured on video.

\"Phase two was totally planned,” said Kevin Miller. “We just didn't know when it was going to occur, and it occurred when nobody was here. GOD made this happen. Gravity.\"

But the crumbled display has drawn even more attention.

Fans have taken pictures standing next to the display, and posted them on social media.

\"It does make sense to see sort of the fall of man, the fall of civilization embodied in a bag of Cheetos.”

The Roadcut Exhibit will wrap up at THELMA on June 21st.

The artist, Mike Womack is based in New York and wasn't available Wednesday evening for this story.