A Retired Wisconsin Marine Finds an Outlet in Theatre 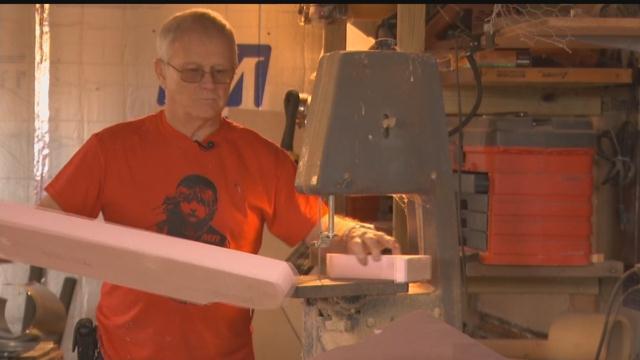 There's a retired Wisconsin Marine who's been a godsend for one high school in the area.

For the last few years he's built sets for school musicals, and he's received rave reviews for his craftsmanship and creativity.

Inside Dave Babiash's shop just outside Denmark, there's a hint of broadway in the sounds of construction.

After serving in the Marines and building homes for 30 years Dave volunteered about three years ago to build theatrical sets for a Denmark High School.

He's now finishing up the set for Les Miserables.

The Denmark High School Musical Director, Dave Harper, recalls how quickly the design ideas came to Babiash. "When I sat down I said Dave, this is kind of what I'm picturing. And he says, well, give me a picture. So I gave him a picture and he made it. I didn't have to give him any specifications, no numbers, no design, the scale or anything of that nature. He basically sees a picture and builds it."

Dave Babiash says he enjoys what he does. "Well, I've had a lot of compliments on it. Everybody says wow. It makes you feel real good seeing the expressions people have. Because that's gratification."

As for the students, who affectionately call Dave "grandpa", they say they're appreciative.

Dave says the work makes him feel like he has the greatest unpaid job in the world.