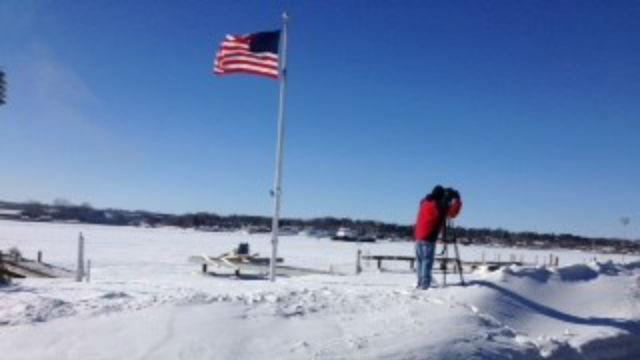 November 2014 goes down in record books as cold and for some spots across the area, snowy!

While it seemed like the month was more reminiscent of winter than late fall, it didn't start off all that bad. The first eleven days of the month featured highs mostly in the 50s with no measurable snowfall in the city of Milwaukee. Then, Old Man Winter paid a visit, and overstayed his welcome! By the 12th of the month, temperatures across our corner of the state stayed below the freezing mark. The weekend of the 15-16th brought the first accumulating snowfall of the season. Even though amounts were light in the order of an inch or two, that first inch of snowfall came earlier than the normal. The first inch of snow for Milwaukee generally occurs around December 2nd. Overall the month ended on a wintry note with 4.8\" of snow (2.3\" above normal) along with 19 of 30 days featuring temperatures below average. The average monthly temperature in the city was 32.4° making this November, the 12th coldest on record. Many of those cold days also came with biting north to northwest winds, which at this time of the year, can make for some lofty lake-effect snows for spots downwind of the Great Lakes.

At the National Weather Service in Marquette Michigan, 53\" of snow fell during the month. The nearly four and half feet of snow covered the old monthly snowfall record of 48.9\" which was set back in 1991. On average, Marquette sees about 24.4\" of snow during November. In addition to the snow, Marquette recorded the coldest November on record with an average temperature of just 21.5°. The previous record of 22.4° was set in 1995. November 2014 ended up nearly 9° below normal in Marquette, MI.

Down towards Rhinelander snow also piled up in a big way. During the course of the month 32.4\" of snow fell, smashing the old record of 21.5\" set in 1957. The Thanksgiving holiday also provided new record low temperatures in both Rhinelander and Antigo at -11° and -13° respectively.

Various other record low and record low max temperatures were set during the month of November across the area. As we look ahead to what December will bring, fortunately there's good news in terms of the weather. Of course we have to keep in mind that December kicks-off the meteorological start to the winter season. In Milwaukee the average high/low on December 1st is 38°/25° and by the month's end the average high/low is 29°/17° on the 31st. The First Alert Weather team has quiet conditions into the first two weeks of the month along with more seasonable type temperatures.

In addition, the National Weather Service's Climate Prediction Center has most of the country looking at high probabilities of warmer than normal temperatures. That trend continues into week two across most of the lower 48.

Of course we'll be keeping a close watch on conditions through the month so be sure to check back often for updates!