A Reckless pooch, a brutal storm ... and a happy ending 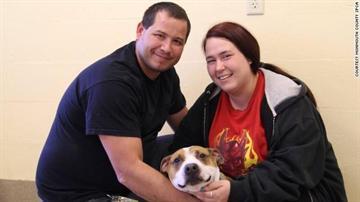 (CNN) -- When Chuck and Elicia James ventured to their local animal shelter to adopt a dog, they expected to meet a new member of their family. Instead they found themselves reunited with their long lost canine.

The James' had not seen Reckless, a brown and white terrier-pitbull mix, since he went missing over a year and a half ago during Superstorm Sandy. They had lost their beloved pup after the fence in their Keansburg, New Jersey, home was mangled during the storm, Chuck James told CNN on Friday.

While the family never stopped looking for Reckless, for their 10-year-old daughter's birthday they decided it was time to move on and adopt a new dog at the Monmouth County SPCA.

To their surprise, the first dog they were introduced to was one named Lucas, who had a striking resemblance to their former pup.

\"He jumped 3 feet in the air,\" James said. \"He immediately recognized us. And then the tears came -- there wasn't a dry eye in the place.\"

The James' confirmed it was their dog based on an uncanny scar on the top of his head.

\"After Sandy, we had so many animals being turned in,\" said Jerry Rosenthal, president and CEO of the animal shelter. Rosenthal told CNN that 3-year-old Reckless ended up at the shelter last November after an employee found him on the streets.

Rosenthal believes Reckless was taken in by another family for a period of time before he once again got loose.

Rosenthal said the James' story really emphasizes the importance of getting your pet microchipped. Microchipping is a process in which an animal is implanted with a rice-sized chip that is used to identify him or her.

\"If Reckless had been microchipped, we could have reunited him with his family much sooner,\" he said.

\"We love happy endings. I always tell people our goal is to prevent animals from coming into the shelter except when we can get them back to their original owners,\" Rosenthal said.

The James family is still displaced from their home after it was destroyed by Sandy. They are currently residing at a local hotel with Reckless after the hotel happily allowed him to stay.

The James' 10-year-old daughter was absolutely ecstatic with Reckless' return and the two have been inseparable since, Chuck James told CNN while on a family weekend camping trip.

\"The only thing I can say now is I am finally on a vacation with all the members of our family again,\" said James.