A new face for Captain America 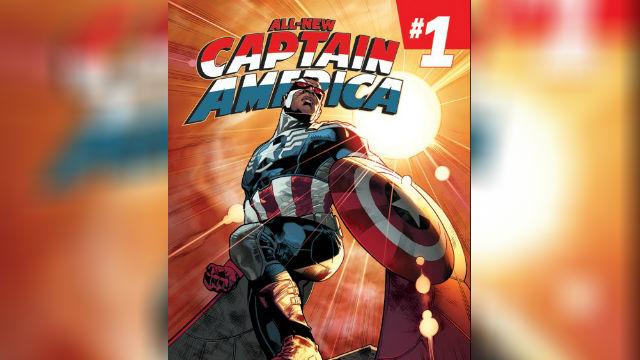 Say hello to the new Captain.

Sam replaces Steve Rogers, who begins to age rapidly after losing a battle (he came from the World War II era, after all.)

With a woman taking over the role of Thor, an African-American Captain America is yet another example of the diversity trend in comic books.

CNN recently spoke to writer Rick Remender on what to expect with this big change.

CNN: What led to this decision to hand over the role of Captain America?

Rick Remender: I had been writing Steve Rogers for a little bit; he's this kid raised in the Great Depression, and I wanted to explore that. That story has been the status quo of Captain America since the 1960s.

As I was developing the series, I fell more in love with Sam Wilson as a character and realized that in Marvel continuity time, he would be a Generation X-er, as am I. He'd have a more modern sensibility and be able to speak to an audience the way Steve Rogers wouldn't be able to, so we started building the story from there.

CNN: How will Sam handle things differently than Steve?

Remender: The two characters both come from a tumultuous, difficult place. But Sam is somebody who isn't reflecting on things as a soldier. He wants to stand up and put himself between the forces of evil and corruption and things that would harm the everyday citizen. Sam will not be working as closely with S.H.I.E.L.D. as Steve (spoiler alert!). Ultimately, the way they approach problems will be quite different.

CNN: What will Steve's role be now?

Remender: Steve Rogers -- who has aged now; time has caught up to him -- will still be a tactician, providing his military experience.

Steve is almost an eye in the sky. Since he is incapable of serving as Captain America, he will be at the Avengers mansion at the command station. Beyond that, he'll be a military strategist, the one thing that Sam really isn't.

CNN: What have you heard from fans?

Remender: The feedback's been great! Obviously, there's been a few ugly comments and people who have taken offense to the change for various reasons. But that's been the challenge of the modern era, to ignore the hate online and to focus on the positivity.

One of the things we got were photos of kids holding the shield. We got a photo from a predominantly African-American classroom, where the kids were jumping up and down with joy with the image of Sam behind them. Culturally, that's something that is significant. If it helps one kid feel a part of something and makes them feel that they are reflected in their heroes ... that's a wonderful byproduct that will hopefully have more positive effects than just being an exciting superhero comic.

CNN: Will Sam meet up with other characters, like the new Thor?

Remender: Jason Aaron -- who is the writer of \"Thor\" -- he and I have been cooking up some potential crossovers for the two books, along with appearing in \"Avengers\" stories.

CNN: How long will this last?

Remender: When I proposed it originally, it was seen as \"You can't do it unless it's going to be a long-term change.\" Depending on how well I do my job and people's reaction, this could be a permanent change or something that goes on for a good long while.

CNN: What can fans expect in upcoming issues?

Remender: I wanted to put Sam into something that felt like a traditional \"Captain America\" comic book but wanted him to come up against an insurmountable wall unlike anything Steve has even faced.

This is basically the rise of Hydra in the Marvel universe, in a way we've never seen a terrorist organization rise before. Under the watch of Baron Zemo and Chancellor Cassandra, they're moving forward with some big James Bond-ian evil plans. Hydra has already won before Sam realizes that they're up to something. We put him up against a huge wall that's going to have giant ramifications for the entire Marvel universe. That has implications we can appreciate in the world we're living in today.