A mayor ordered police to crack down on social gatherings. They found his wife at a bar 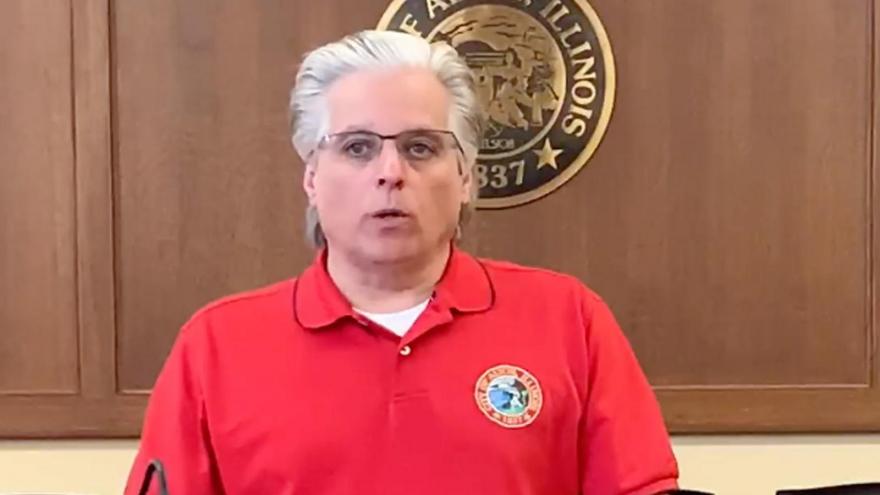 Brant Walker, the mayor of Alton, Illinois, ordered police last week to issue citations or arrests at their discretion for people violating the state's stay-at-home order.

(CNN) -- A mayor in Illinois pleaded with residents last week to follow the state's stay at home order. After officers reported that people were continuing to defy the rules, the mayor said he had directed the city's police department to use its discretion in issuing citations and arrests.

"These are very serious times and I'm begging you to please stay at home," Brant Walker, mayor of Alton, Illinois, said in a briefing on Friday.

Less than 48 hours later, police broke up a gathering at Hiram's Tavern in downtown Alton. Among those in attendance: Walker's wife.

Walker announced in a statement on Monday that police had investigated and stopped a social gathering in violation of Illinois' statewide order around 1 a.m. on Sunday. He said police also informed him that his wife was there.

"I instructed the Police Chief to treat her as he would any citizen violating the 'Stay At Home' order and to ensure that she received no special treatment," Walker's statement read.

Illinois' stay at home order prohibits all public and private gatherings of any number of people outside a single household or living unit. The Alton Police Department said in a press release it had received several complaints that the tavern was continuing to operate on weekends.

Officers found no unauthorized activity until Sunday when "several individuals were located inside Hiram's Tavern in an area outside public view, clearly disregarding the executive order and public pleas for compliance," according to the release.

Alton police confirmed to CNN that officers issued a criminal complaint for reckless conduct -- a class A misdemeanor charge punishable by up to 364 days in jail and/or a fine of $2,500 -- to everyone who had gathered at the bar.

The mayor said in his statement that he was embarrassed by his wife's actions.

"My wife is an adult capable of making her own decisions, and in this instance she exhibited a stunning lack of judgement," Walker said. "She now faces the same consequences for her ill-advised decision as the other individuals who chose to violate the 'Stay At Home' order during this incident."

CNN has reached out to Walker's office for further comment.

Alton is about 25 miles from St. Louis, Missouri, and has a population of 26,528, according to estimates from the US Census.