A generation of heroin orphans 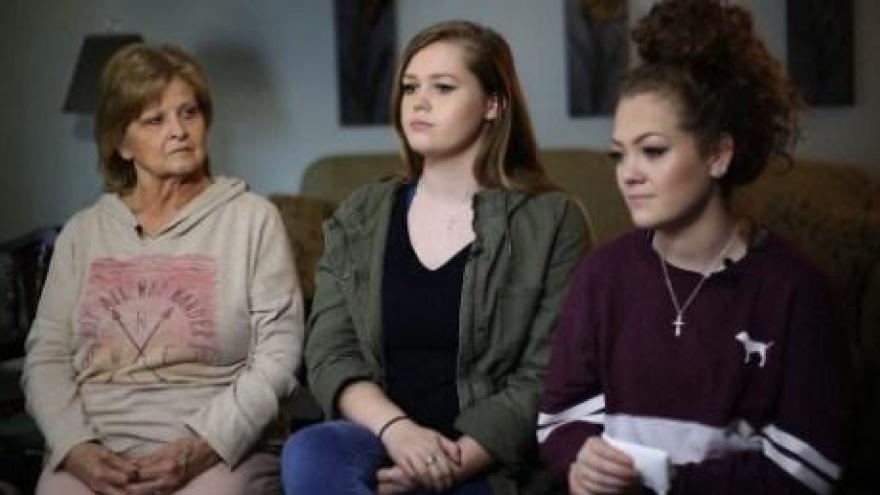 (CNN) It was bedtime in the Flynn household but the kids were wide awake, excited by the arrival of CNN reporters to their colorful, crowded Kentucky home. The entry is crammed with bunk beds on one side and, separated by a bookshelf, a makeshift den with a desk and computer on the other.

Grandparents Sandra and Michael Flynn lovingly call their home \"the Zoo\" and each has said, with all the kids and commotion, \"its impossible to be quiet in the zoo.\"

Nanny and Poppy, as they're called, have raised two generations of children here, their own and now their five grandkids: 16-year old Willa, 10-year old Dallas, 7-year old Sarah and 6-year old twins Megan and Morgan.

\"She's the loving one,\" said Michael Flynn pointing to Megan who has curled up on the couch in purple pajamas, her arms around my waist. Her sister Morgan, in similar pajamas, is navigating the crowd carrying a faded laundry basket filled with her favorite stuffed animals.

First-grader Sarah leans over the armrest. Her thoughts flow rapid fire, quick and sharp, as she digs out a journal and starts to write. Dallas, who Poppy calls a \"computer whiz,\" tosses a football in the air, clutching it to his side like he is about to run. As the only boy, he is outnumbered. Willa shows me a scrapbook filled with faded baby photos taken before her father died of heart attack in 2010, before her mom started using heroin. It is clearly her most precious possession.

The children have lived with their grandparents for six years since April 23, 2011, right around the time the twins were born.

\"They were born addicted,\" said Sandra. \"The state came in and said (their mom) could not care for them anymore, and they asked if we would take all five and we said, 'Of course.' I didn't think this was real. I thought this was all just a big mistake, but we took all the kids and we have had them ever since.\"

The Flynns were retired at the time and planning to sell their house and move to Florida. Once the grandkids came the plans changed. Their savings disappeared. They live off Social Security and part-time work. They never moved.

Experts point to the heroin and opioid epidemic over the last decade for the rising number of children orphaned and/or essentially abandoned by their parents.

Across America, 2.7 million grandparents and other relatives are raising grandchildren. Another 430,000 are in foster care according to the 2015 Census. Exact figures correlating the rise in heroin use with the increase in children being cared for by someone other than a parent are hard to pin down. Anecdotally, however, school administrators in Kentucky say they have seen more and more grandparents or other relatives seeking social services and counseling for children whose parents can no longer care for them as a direct result of heroin or opioid addiction.

According to Kentucky Youth Advocates, the state has the highest rate of \"kinship care\" in the country. An estimated 60,000 children there live with a grandparent or blood relative. Another 8,200 are in foster care.

Mary Jo Dendy coordinates social services for grandparents and families in Lexington, Kentucky. She believes the number of relatives taking care of kids is probably even higher, because many do not apply for any services at all.

Dendy said the psychological impact of this trend is devastating for kids. \"Sometimes the parent has OD'd, sometimes the parent is in prison or they're just gone and the kids don't know where they are. It's a deep sense of loss, that yearning for a relationship with their parent,\" she said.

The last time Willa saw her mom was five years ago when she was 10. Her mom served time in jail, then disappeared. She recently surfaced trying to \"friend\" Willa on Facebook and Snapchat.

The Flynns, who have permanent custody of their five grandchildren, are fearful Willa will regress and get pulled back into what they call her mom's world of secrets and lies. The three youngest siblings were so young when they were taken away they have virtually no memories of their mom.

But Dallas, falls somewhere in the middle. He was just five years old at the time, neglected and still in diapers. \"His hind end was blistered raw\" when he first arrived, said Poppy.

Dallas listened intently as his grandparents described his absent mom and missing childhood. Despite his best efforts not to cry, the tears fall gently down his cheeks.

Sandra kneeled down and spoke softly, her arms around her grandson as she tried to coax away his pain. No matter how much love they give their grandchildren, Sandra said, \"There's always going to be a want, a need, something they didn't get from mom.\"

\"I learn to accept it, you know...\" said Willa, her voice catching and then trailing off.

The Flynns are now working with the court to arrange strict, supervised visits between their daughter on the condition that she pass her drug tests. Two of her children are curious to meet her.

Sarah has a vague memory of her mother's blond hair and wants to see how long it is. Dallas has asked to play a single game of \"Operation\" with his mother as long as his grandmother is in the room. Both children are in counseling to prepare for the visit.

As for their mom, because of her struggle with heroin and the possibility she could vanish from their lives at any moment, \"she will never have unsupervised visits,\" said Sandra. \"We have worked too hard to get the kids in a good place.\"

Julian Cummings contributed to this story.