A fire in Beloit destroys home and injures a firefighter 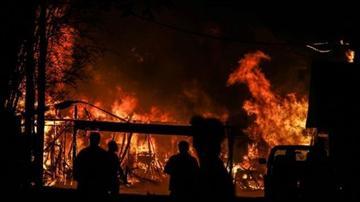 BELOIT, Wis -- Officials said one firefighter was injured and a house was damaged in a fire Friday night.

On arrival, firefighters saw heavy fire from the rear of the structure, according to the report.

Fire damage was reported as extensive to the rear of the home and there was smoke damage reported throughout the building, the fire department said.

Fire Department Deputy Chief Joseph Murray said the fire displaced up to nine people who lived in the building and damaged four structures near the residence.

One firefighter received minor injuries but occupants who were home at the time of the fire made it out safely, according to the report.

Officials said estimated costs of damage were not yet available Saturday morning. The cause and origin of the fire are under investigation.