MPD responds to FPC directives ahead of meeting regarding Chief Morales 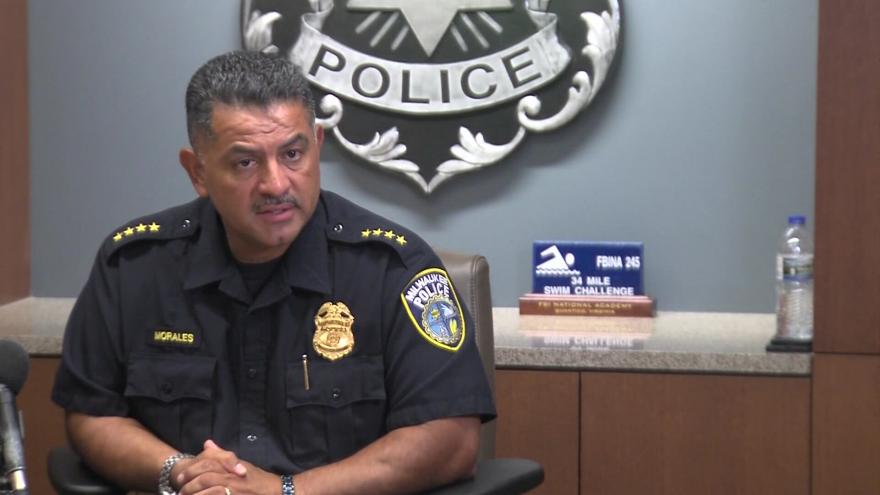 The police department released a response to the directives given to the chief by the commission Wednesday night.

This comes as the commission plans to discuss potentially disciplining or firing the chief at a meeting Thursday night.

In a 20-plus page document, the Milwaukee Police Department detailed the issues it had with the directives handed down by the FPC two weeks ago.

It included part of a conversation from the City Attorney's Office to the executive director of the Fire and Police Commission about the chief's request for a legal opinion about whether the directives were legal and enforceable.

“On a preliminary review, we do see questions regarding the legality of the MPD providing open investigative information and reports to a public forum. There may be additional legal questions we have not yet had time to explore, particularly because we were not provided an opportunity to meet and discuss the legality of the directives before they were issued,” Deputy City Attorney Miriam Horwitz emailed Executive Director Griselda Aldrete, according to the document.

A deputy city attorney said they would not be able to provide a legal opinion by the time the chief needed to meet his deadlines for the directives, and strongly advised the timeline for the chief to respond to the directives be extended.

According to the document, only one commissioner has responded, and recommended against the city attorney's opinion for extension.

There has been one extension for one of the directives, regarding the department's compliance with the ACLU lawsuit.

The document from the department also argues statements made from the FPC -- that the Chief's responses to requests from the commission had been delayed or ignored.

The department said it is not aware of a single request that has been outright ignored.

“The directives are replete with factual errors, unclear requirements, very serious legal issues and a lack of due diligence to conduct the statutorily required reviews required before a directive could be issued," the document said.

This all comes before a big meeting Thursday night, Aug. 6. On the agenda -- a resolution to vote on the dismissal, demotion, licensing, or discipline of Milwaukee Police Chief Alfonso Morales.

Frank Gimbel, attorney for Chief Morales, said he was "Shocked and dismayed, but not surprised."

He says the chief has "intended and plans to comply with providing all the information requested in the directives by tomorrow, the deadline day. So, how they can, if you will, consider some level of job continuation reaction to him without having reviewed his responses to the directives is beyond logic or understanding."

"The entire behavior of the Fire and Police Commission with respect to this chief defies logic or description," he went on to say.

CBS 58 reached out to the Fire and Police Commission, but has not yet heard back.

MILWAUKEE (CBS 58) -- Milwaukee's top cop could be disciplined or even fired this week.

We've learned the Milwaukee Fire and Police Commission is expected to discuss a resolution to vote on the "dismissal, demotion, licensing or discipline" of Milwaukee Police Chief Alfonso Morales.

The commission handed down 11 directives to Morales last month.

The directives addressed several issues, including the use of police tear gas during recent protests.

Morales said Tuesday, Aug. 4, that he was going to comply with all of the directives.

This is a developing story. Stick with CBS 58 for the latest updates on-air and online.