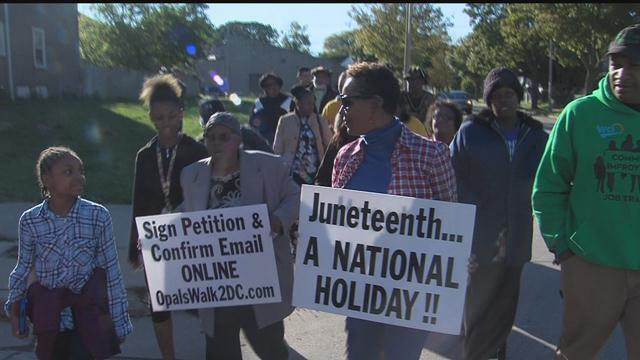 Step by step, Opal Lee has made her way to Milwaukee, leading a small, but mighty group of supporters on the city's north side.

She's working to make Juneteenth a national holiday. Forty-five states, including Wisconsin, recognize it on a state level.

In fact, Milwaukee has one of the oldest Juneteenth celebrations in the country.

June 19, 1865 is when slaves in Texas learned they were free, more than two years after Emancipation.

"All kinds of people made this happen and we need to acknowledge, it's not just a black thing, that it's everybody's thing," she said.

During her two-mile walk in Milwaukee, Lee told CBS 58 about another dream, seeing a Juneteenth theme park.

"I want it to be an educational affair," she said. "I want people to learn because we have a lot of catching up to do."

Along Martin Luther King Jr. Drive, she stopped at businesses like Gee's Clippers to share her message and picked up a Juneteenth soda.

Community leaders said Lee is a taste of inspiration, especially for the city's youth.

"And just think of what they'll become tomorrow because of what Ms. Opal is today," said Milwaukee resident Andre Lee Ellis.

"I want to say thank you to everybody because everybody has been fabulous," she said.

Lee needs 100,000 signatures on her petition by October 26th and when you sign it, make sure to get a confirmation number.