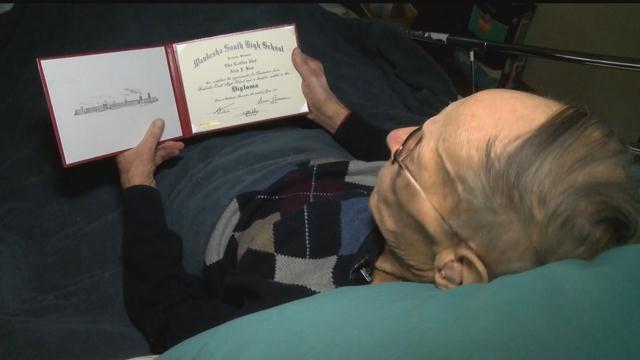 Graduation dates are coming up on the calendar and in Waukesha one high school is adding a special member to their class of 2016.

It's been a while since he's been in the classroom but 88-year-old Alvin Kind has finally received his diploma.

"I wanted to get it all along but I never got around to it," Kind said.

"I didn't because I was lacking one subject," Kind said. "English."

Kind may have may have completely that course if not for World War II.

"I was drafted two months and two days after my 18th birthday," Kind said.

After 13 months of stateside service ending in 1946 he'd go on to raise a family. Alvin's son, Allen, said his dad never really really talked about his 'non-graduation'.

"Although my dad never vocalized it I truly believe the reason why he didn't share is because he never wanted us to think that not completing something was even an option," Allen Kind said.

"He's very ill with prostate cancer which has gone to the bone. His health is failing rapidly and it seems to me he just insists on hanging on," Beverly said.

"You know, he went through so much of the high school experience and just being one credit short, I know it bothered him at the time," Allen Kind said. said.

"[my siblings] shared as much information as we could with the school district," Allen Kind said.

"We learned there's some type of government legislation that allowed veterans to receive their diplomas if they were drafted prior to receiving a diploma," Allen Kind said.

It lead to the moment last week when Waukesha School District Superintendent Todd Gray and others came to Alvin's Waukesha home for a one-person graduation ceremony.

"A whole bunch of dignitaries from Waukesha south came to my house," Alvin Kind said.

"He was on such a high note after this ceremony it took at least a day to get him to come down off of his ivory tower," Beverly said.

A good thing - they say - focusing on graduation gowns instead of hospital gowns.