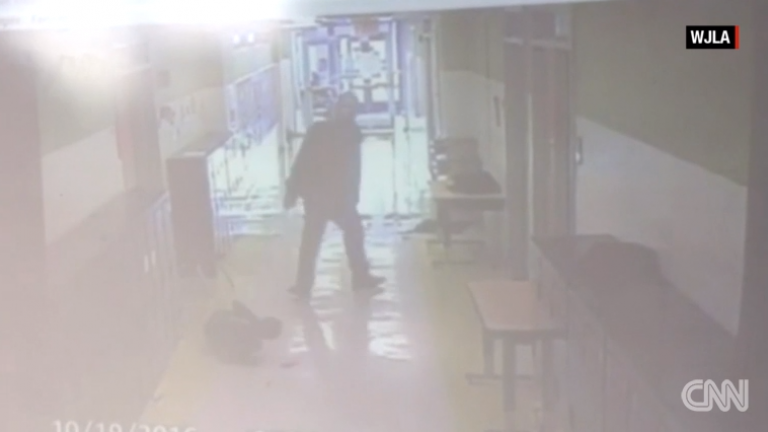 (CNN) It happens so fast you almost miss it.

A man walks down the hallway of a school, crossing paths with a young boy. Suddenly, without provocation, the man reaches down and punches the boy in his stomach. He then casually walks toward the door.

The boy falls to his knees, doubled over in obvious pain. The man pauses, just for a second, to look over his shoulder at the boy, before walking out.

Surveillance video captured this shocking encounter, which happened last week at the KIPP DC Spring Academy in Washington DC. The boy in the video, 7-year-old John Mclean, told CNN affiliate WJLA that the punch to the gut was "real painful."

It was painful for John's mother to see as well. She says the man who punched her child is a fellow parent at the school.

"You watched my son on that ground and you didn't do nothing ... and all you could say to me is you were playing," said Lena Mclean, who requested a copy of the video from the school.

The man has not been arrested yet, something Mclean is hoping for.

A police report has been filed, and police are investigating.

In a letter to parents, the school said, "The health and safety of our students, teachers, and staff remains our number one priority and we will continue to work closely with the police to ensure that students and staff are safe at school."