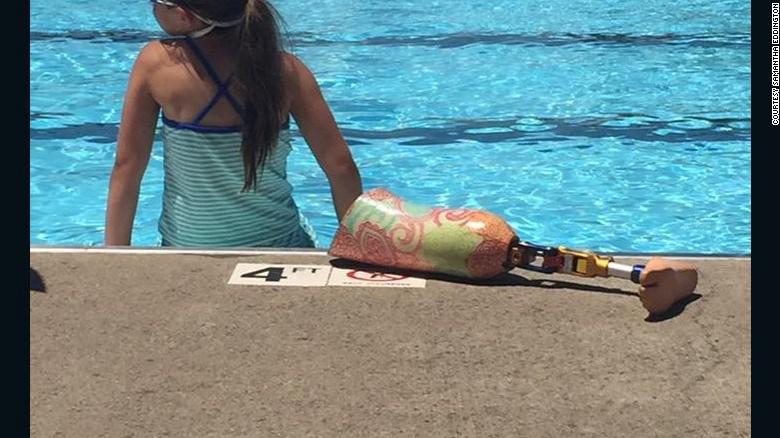 (CNN)7-year-old Katie Eddington loves swimming, running, basketball and soccer. Her favorite animal is a horse. Her favorite flavor of ice cream is chocolate.

By all accounts, Katie is a normal little girl. But Katie has a superpower: She has a special leg.
Katie was injured in a lawnmower accident in October 2013.
"I had just left to go to work," said Katie's mother, Samanatha Eddington. "My husband (Russell Eddington) was finishing mowing the yard."
Katie, 4 at the time, was in the house initially, but she went outside.
"She slipped and fell on the grass," Eddington said.
Russell never saw her. He ran over her right leg.
"The majority of the injury was right at and just above the knee," Eddington said. "She lost some muscle and some bone."
Katie endured 16 surgeries in the first 30 days after the accident.
For the next 2½ years, the Eddingtons exhausted their options. They took Katie to physical therapy, they took her to different hospitals, they even set up an obstacle course in their backyard in Georgetown, Kentucky, to help with her rehabilitation.
Eventually, though, "We hit a wall," Eddington said. "Her leg was not growing."
In July 2015, the Eddington's decided to have doctors amputate Katie's leg.
The decision wasn't easy.
"I wanted her to keep her leg," Eddington said, "But I knew her life would be better."
They were worried removing her leg would damage her naturally happy spirit.
"That was not a life lesson I wanted her to learn at 5," Eddington said. "That was one of the hardest things for me."
But the chance at giving Katie a life without a leg that caused her problems was better than other options.
"I did what my heart told me to do," Eddington said.
Katie had a total of 22 surgeries after her accident; her last was in December 2015, when doctors amputated.
Since, she hasn't had a single problem.
Thanks to Katie's invincible attitude and her will to improve, she was walking within two days of her operation, exceeding the hospital's expectation by three days.
The Eddington's found Katie a prosthesis in Orlando through a nonprofit called "Limbs Matter," an organization that hopes to spread awareness about lawn mower-related injuries and how to prevent them.
Katie has always been a very happy person, even before her accident, and she continues to be.
"There's a little spark about her," Eddington said.
That spark pushes her to stay curious and competitive despite her physical challenges.
"She is able to comprehend things that are beyond her."
Her family has also been hugely supportive on her road to recuperation.
"I'll ask her 'What can you do that someone else can't?' " Eddington said. "If you have a weaker leg, you're going to have really strong arms."
After that she found Katie in her room doing pushups.
Now she's training to run a 5K at the end of August. She is already running 2 to 3 miles with her special blade.
But why a 5K? Why running?
True to her life motto of perseverance, Katie said, "I just want to try!"
Share this article: