7 things You Should Know about the Macy's Thanksgiving Day Parade 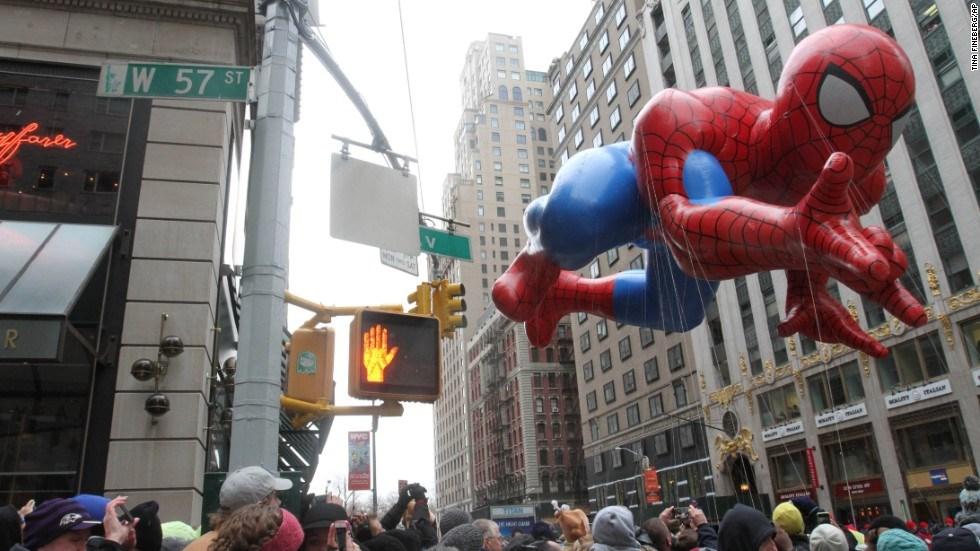 The parade will air on CBS 58 at 8 AM on Thanksgiving Day.

The gathering is celebrating the 89th year of making its way down some major Manhattan thoroughfares to Macy's flagship store at Herald Square. Hundreds of thousands are expected to see it in person; millions will watch from home.

Here are some things you should know about this treasured holiday tradition:

It was originally a Christmas parade.

Macy's has been at its current flagship location, at Broadway and 34th Street, since 1902. (The original store, incidentally, was about 20 blocks south, on Sixth Avenue near 14th Street.) Continuing expansion made the location what Macy's called the "world's largest store," an entire city block with more than 1 million square feet of retail space.

In celebration, in 1924, employees organized a Christmas parade featuring "floats, bands, animals from the zoo and 10,000 onlookers," according to a Macy's history page. It also started way up at 145th Street, about 70 blocks north of where it will begin in 2015. The parade concluded with Santa Claus and the unveiling of the store's Christmas windows. Three years later, the Christmas Parade was renamed the Thanksgiving Day Parade.

The balloons have been around almost since the beginning.

According to Mental Floss, the balloon attractions debuted in 1927, inspired by a balloon float. Even then, they were massive -- one was a 60-foot dinosaur -- and, in those days, had more to deal with than just high winds and crazy weather: Until 1938, an elevated train ran down Sixth Avenue.

Well-known characters have been part of the parade since that 1927 outing. Felix the Cat was there from the beginning, and Mickey Mouse joined in 1934, the same year that featured a balloon based on popular entertainer Eddie Cantor. "Peanuts" characters, especially Snoopy -- who made his first appearance in 1968 -- are regular visitors.

This year's balloons will include Angry Birds' Red and "Ice Age's" Scrat.

One tradition didn't last long. The balloons were originally allowed to float away, and those who found them got a gift certificate from Macy's.

The parade was first broadcast on the radio.

You had to use your imagination when the first broadcasts of the parade took place in 1932; they were on the radio. The parade was first televised in 1946 in New York and then nationally on NBC the next year.

You can watch the balloons get inflated.

It's hard to keep things hidden on an island as cramped as Manhattan, and the Macy's balloons are no exception. They're inflated at a staging area at 77th Street and Central Park West, near the American Museum of Natural History. For many families, watching the balloons get ready is just as much a tradition as the parade itself. The public is allowed to view the balloon preparations until 10 p.m.

The balloons are constructed at Macy's Parade Studio in Moonachie, New Jersey.

The route has changed in recent years.

For years, the parade's Midtown route went right down Broadway, Manhattan's spine. But in 2009, the route was moved to Seventh Avenue because of new pedestrian plazas along Broadway and then changed to Sixth Avenue in 2011.

Given the parade's draw as a tourist attraction, this did not go over well.

"Why would Macy's want to have a parade go down lifeless and empty Sixth Avenue rather than through Times Square?" Times Square Alliance President Tim Tompkins asked the New York Daily News. "My members are dazed and confused by this decision."

This year's parade will begin at 77th Street and Central Park West, cut east at 59th Street/Columbus Circle along Central Park's southern border and then head south at Sixth Avenue. At 34th Street, it will move west and end at Macy's.

It looks so nice on television, doesn't it?

But late November in New York can be dicey. In 1957, a wet day got wetter for people near a Popeye balloon: The character's hat filled with water and drenched paradegoers. The same thing happened in 1962 with a Donald Duck hat.

Superman once lost his arm to tree branches.

But the worst was probably 1997, a blustery day in the Big Apple. During that parade, winds reached more than 40 miles per hour, and the balloons were difficult to control.

One balloon struck a lamppost and injured four people; one woman was in a coma for a month. The Pink Panther threatened a woman holding its ropes.

"The balloon was caught on top of me and my daughter," she told The New York Times. "We thought it was going to smother us."

This year's forecast calls for temperatures in the 40s and a partly cloudy day. There's a 10% chance of rain and virtually no wind.

The parade remains a huge attraction.

It's not just a parade, of course: It's full-scale entertainment for millions.

This year's festivities will include Questlove, Mariah Carey, Panic! at the Disco and Miss America 2016 Betty Cantrell. Cast members of several Broadway shows, such as "Fiddler on the Roof," "On Your Feet!" and "Something Rotten," will perform. (This being NBC, it's also rolling out a preview of its live version of "The Wiz.")

And if that's not enough entertainment, Macy's will open at 6 p.m. for shopping.