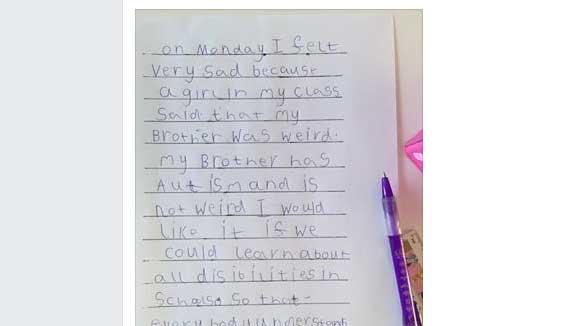 (CBS NEWS) When 6-year-old Lex Camilleri was told by a classmate that her brother was “weird,” she didn’t react in a way some people might consider typical for her age.

Instead, she simply told the child that her brother has autism.

The classmate didn’t understand. After school, a disappointed Lex told her mom what happened, and then she quickly got to work.

“She said she wanted to make a change,” Lex’s mom, Sophie Camilleri, wrote in a Facebook post that has since gone viral with nearly 30,000 shares. “She wanted to talk about ‘Disability Awareness In Schools’ in her next School Council Meeting, so she wrote a letter.”

With some spelling assistance from her mom, Lex submitted the letter to her school.

Now that handwritten note is warming hearts across the world.

“My brother has autism and is not weird,” Lex wrote. “I would like it if we could learn about all disabilities in school so that everybody understands that some people are different, but we should all be treated the same.”

Sophie Camilleri said she couldn’t be more proud that her little girl wants to change the way children view others with disabilities.

“My daughter is 3 and my son is 9 and is Autistic,” one user commented. “I can only hope my daughter has the same compassion and drive as yours.”

“You must be proud. Wish more children and adults had your attitude,” another wrote.

“We think there should be much more autism understanding in the classroom which is why are encouraging all schools and nurseries around the country to sign up for our free autism resources,” the organization said.

Camilleri has no doubt that her daughter will make a big difference for people – like her brother – who may be seen as a little different.

“She is only 6 years old and is already part of the school council, wanting to make this change,” Camilleri proudly wrote.