6 Takeaways From the Democratic Debate 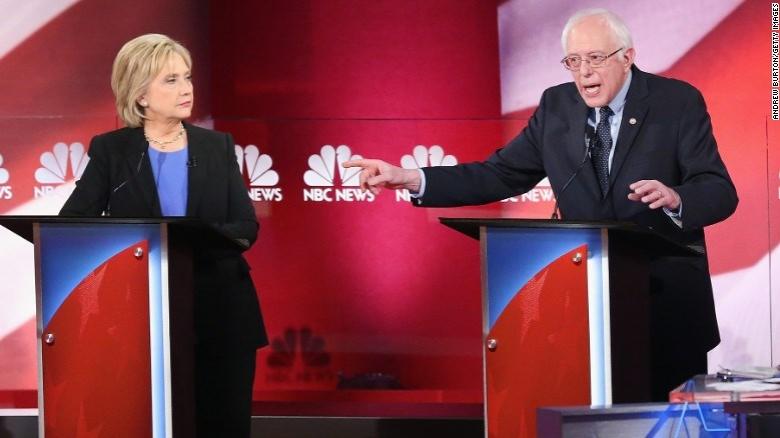 Charleston, South Carolina (CNN)Bernie Sanders is mad as hell -- and he's hoping Democratic voters are, too.

The Vermont senator denounced a "corrupt" political system and cast himself as a break from it, while Hillary Clinton tied herself tightly with President Barack Obama and argued she'd build on his legacy, as the Democratic presidential contenders clashed Sunday night in Charleston.Here are six takeaways from the final Democratic debate before the first votes are cast in Iowa and New Hampshire:

It's not often you hear Sanders say the words "my good friend Donald Trump" -- but the two have something in common: Their tones match a moment of anger within the electorate.

Clinton promised continuity. She highlighted her record. She touted her ability to get results within the limitations of the modern political climate.

Sanders offered none of that. Like Trump, his cause is change, not compromise.

His take on why his Medicare-for-all proposal can't pass in Congress could have been applied to just about any of his arguments: "It's because we have a campaign finance system that is corrupt. We have super PACs. We have the pharmaceutical industry pouring hundreds of millions of dollars into campaign contributions and lobbying and the private insurance companies as well."

Sanders' fire-and-brimstone touches on some of the same topics as the Republican front-runner -- particularly super PACs and the influence of money.

Just like Trump, Sanders even riffed on polling when asked about his strategy to win over African-American voters, arguing that they'll like him more once he wins in Iowa and New Hampshire.

"Let me talk about polling. ... In terms of polling, guess what, we are running ahead of Secretary Clinton in terms of taking on my good friend Donald Trump," Sanders said. "We have the momentum. We're on a path to a victory."

It was her go-to move, and she went to it a lot: On gun control, health care, financial regulation, her "many hours in the Situation Room advising President Obama" and more, Clinton cast herself as the defender of Obama's legacy and Sanders as someone who'd toss out his accomplishments.

There are three reasons for the strategy: Obama remains popular with Democrats. She has a strong claim to the President's legacy having served in his Cabinet as his top foreign policy officer. And minority voters favor Obama and Clinton over Sanders.

Clinton is eyeing South Carolina as a firewall -- a place she can regain her footing even if Sanders wins Iowa and New Hampshire, two states that are whiter and more liberal than the Democratic electorate overall.

Her attacks on Sanders were all designed to drive a wedge between him and Obama.

She accused Sanders of calling Obama "weak" and "ineffective" when it came to perhaps Clinton's most vulnerable subject, Wall Street reform, and said he'd tried to recruit a primary challenger against Obama in 2011. That year, Sanders had said many Democrats are "deeply disappointed" in Obama's shifts rightward, and a primary opponent could "begin contrasting what is a progressive agenda as opposed to what Obama is doing."

"I am going to defend President Obama for taking on Wall Street, taking on the finance industry and getting results," Clinton said.

Purity vs. pragmatism on health care

Sanders' shoot-for-the-moon liberalism and Clinton's embrace of Obama were clearest in their biggest fight of the evening: health care.

Just two hours before the debate, Sanders had rolled out a tax plan that would fund his Medicare-for-all proposal to scrap private health insurance entirely and replace it with a government-run program.

Sanders offered himself as the true champion of the left's biggest policy dreams.

"What a Medicare-for-all program does is finally provide in this country health care for every man, woman and child as a right," he said. "The truth is that Franklin Delano Roosevelt, Harry Trump ... they believed that health care should be available to all of our people."

Clinton, meanwhile, noted that Democrats had fought for a "public option" in Congress before Obamacare was passed -- but, to liberals' disappointment, hadn't succeeded.

And then she turned to Obama's legacy.

"We have the Affordable Care Act. That is one of the greatest accomplishments of President Obama, the Democratic Party and our country," Clinton said. "To tear it up and start over again, pushing our country back into that kind of a contentious debate, I think is the wrong direction."

When the debate shifted to foreign policy in its second hour, Clinton displayed a command that was in sharp contrast to Sanders' quiet.

She gamely handled a question about the moment she handed Russian officials a "reset" button as secretary of state and defended what she got for that symbolic button: a new START Treaty, as well as cooperation on sanctions for Iran.

Sanders, on the other hand, has tried to turn back questions about his foreign policy knowledge by pivoting to judgment. But as the primaries draw near, voters often spend time thinking about the commander-in-chief test -- and Sanders has a long way to go in convincing voters of his readiness to handle foreign affairs.

In every Republican debate, all the GOP candidates join together to bash Obama, Clinton and "Obama-Clinton" every chance they can get. And in the earlier Democratic debates, all Clinton and Sanders could talk about was how awful the Republican presidential field -- particularly Trump -- is.

It's a reflection of a tightening race: Clinton spent her first months of the 2016 campaign refusing to even utter Sanders' name. Now, he's a real threat and her strategy was aimed at him, not the GOP.

Health care and gun control, in particular, have emerged as key splits in the Democratic race where Clinton believes she can win liberal voters from Sanders.

The debate was just a block away from the Emanuel AME Church in Charleston, the site of last year's racially-motivated shooting of nine churchgoers. Clinton used that proximity to criticize Sanders, painting him as cozy with the National Rifle Association.

"He voted to let guns go onto Amtrak, guns go onto national parks. He voted against doing research to figure out how we can save lives."

Sanders didn't interject as the debate shifted topics -- a signal he was ready to move on.

No, he wouldn't swipe at Clinton's husband, saying he wants to focus "on the issues, not Bill Clinton's personal behavior."

But Sanders did show a new willingness to attack Clinton on personal matters. Twice, he hit her for delivering paid speeches to Goldman Sachs -- a move intended to undermine Clinton's credibility on Wall Street reform and call into question her commitment to reforming the political system more broadly.

"I don't get personal speaking fees from Goldman Sachs," he said.

Minutes later, he swung again. "You've received over $600,000 in speaking fees from Goldman Sachs in one year," he said, later turning his focus to criminal justice and noting that "not one of their executives is prosecuted" for actions during the 2008 economic crisis.

The man who often crowed that he'd never run a negative attack ad in his life appears to sense that, with a lead in his sights in Iowa and New Hampshire, it's time to strike.