6 officers to be tried separately in death of Freddie Gray 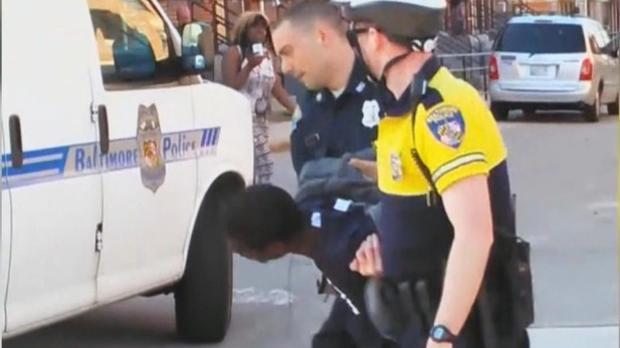 (CBS) BALTIMORE - A Baltimore judge has refused to dismiss charges against six police officers accused in the death of Freddie Gray, a black man who died a week after suffering a critical spinal injury while in custody.

Defense lawyers had argued for separate trials for each of the six because not all of the evidence applies to each defendant and they argued they do not want jurors prejudiced against their clients based on evidence that was brought into the trial against another defendant, CBS News Justice Reporter Paula Reid reports.

According to Reid, this means more money, more time, more jurors, and ultimately a lesser likelihood of conviction.

Also during the pretrial hearing Wednesday, Williams denied a motion by the defense to recuse State's Attorney Marilyn Mosby and her staff due to what defense attorneys characterized as conflicts of interest.

Defense attorneys had also sought to drop the charges against the officers, citing prosecutorial misconduct on the part Mosby.

Williams said that while he was \"troubled\" by some of the comments Mosby made during a May 1 news conference, they did not compromise the defendants' right to a fair trial. He said allegations of prosecutorial misconduct must be addressed by the Attorney Grievance Commission.

Williams called the assertion that Mosby's judgment was impacted by the fact that her husband Nick Mosby is a councilman in a district that experienced a disproportionate amount of violence \"troubling and condescending.\"

\"Being a councilman is not a reason for recusal,\" he said.

Andrew Graham, an attorney representing Office Caesar Goodson, unsuccessfully argued that Mosby's comments after filing the charges against the officers were \"reckless and unprofessional,\" and violated the rules of conduct.

Graham likened Mosby's comments on the case to a \"pep rally calling for payback.\"

Journalists and spectators filled most of the approximately 160 seats in the wood-paneled courtroom Wednesday.

Paula Reid reported from inside the courthouse that the defendants were not present, but Mosby was.

Arguments will be heard next week as to whether the officers' trials should be moved out of Baltimore.

The 25-year-old Gray died on April 12, a week after suffering a critical spinal injury in custody. Charged in connection with his death are Officers Edward Nero, Garrett Miller, William Porter and Caesar Goodson, as well as Lt. Brian Rice and Sgt. Alicia White.

Gray's death led to protests in Baltimore and a riot that prompted National Guard intervention and a city-wide curfew.

Prosecutors wanted to try defendants Nero, Goodson and White together and then do separate trials for Rice, Miller and Porter. The strategy being that the grouping could help the prosecution establish a sequence of events and help them increase odds of conviction, Paula Reid reports.

Dozens of protesters rallied outside the Baltimore courthouse Wednesday to express their anger and indignation over Gray's death. Many of them then marched in the street to the city's Inner Harbor area, where they blocked a main road briefly. Police lined up behind them, and directed them out of the road.

Police spokesman T.J. Smith said Wednesday afternoon that charges were being filed against a person who was arrested for ignoring warnings to get back on the sidewalk.

The man arrested was identified by witnesses as Kwame Rose, a well-known local activist.

Rose said he was hit by a car and needed medical attention, though some witnesses said he was not struck. Police eventually took Rose away in an ambulance.

Separately, interim Baltimore Police Commissioner Kevin Davis said a police officer was kicked in the face by a protester during an incident at Inner Harbor.