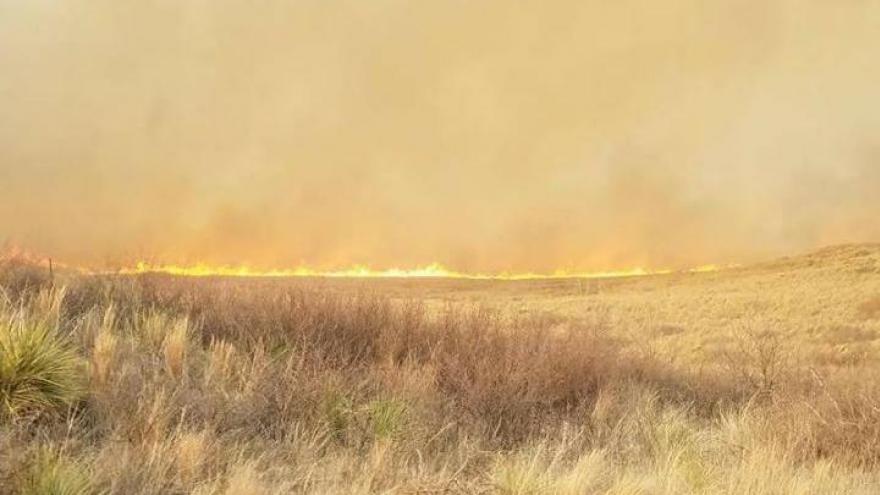 (CNN) Three ranchers trying to save their cattle died in a wildfire in Gray County, Texas, according to Sandi Martin, coordinator with Gray County Emergency Management.

The three were among five people killed by wildfires in the Texas Panhandle as fires continue to scorch swaths of the Southwest and Great Plains.

The Gray County blaze scorched 100,000 acres, but has since been contained, Martin said. State fire marshals are working to determine the cause.

The three victims were identified as Cody Crockett, Sydney Wallace and Sloan Everett, according to Richard Peet, a county judge and the Gray County director of emergency management. Wallace died from smoke inhalation, while Everett and Crockett were badly burned, he told CNN.

The Hoover Volunteer Fire Department said in a Facebook post that all of its units had returned home safely.

One person died in a fire in Lipscomb County, according to Sheriff Kenneth Eggleston -- and another fire-related death was reported in Ochiltree County.

Wildfires have forced evacuations in Texas, Oklahoma, Kansas and Colorado.

As many as five firefighters were injured while fighting another fire near Amarillo, Texas. Several blazes merged into one massive fire reportedly 12 to 15 miles across, according to Potter County Sheriff's Office Capt. John Coffee.

The largest of the two is the Perryton fire, which is about 300,000 acres wide and only 5% contained. The fire, which is located in Ochiltree and Lipscomb counties, has destroyed two homes.

The Texas A&M Forest Service and the National Weather Service Storm Prediction Center forecast that winds, which help stoke the wildfires, will subside on Wednesday.

Elevated fire conditions will return to the area on Thursday, Friday, and Sunday, according to the Forest Service.

Gov. Greg Abbott activated state resources to combat the wildfires, according to a statement from his office.

Kansas Gov. Sam Brownback said a man died from smoke inhalation in Clark County after getting out of a semitrailer truck he was driving.

"We're not out of the woods, by any means," Brownback said at a news conference where he urged residents to stay home if they didn't have to travel.

"Yesterday was just a particularly incredible day for the state. We saw fire, floods, fail, tornadoes, straight line winds and dust," he said.

The Kansas fires have accelerated rapidly throughout the day. According to Catherine Horner, spokeswoman with the state Division of Emergency Management, the fires in Clark County have consumed more than 350,000 acres -- or nearly 60% of the county.

The fires have destroyed 30 homes and compromised bridges, Horner said, but it's now at least 50% contained.

Horner told CNN that the fire in Reno County has forced 10 to 12 thousand people to evacuate. Crews went to homes and structures in the area looking for victims. The Kansas National Guard has lent four Black Hawk helicopters to the firefighting effort for water drops.

She also said the fire spread today to Comanche County, where 500 people had to be evacuated.