5 takeaways from the vice presidential debate 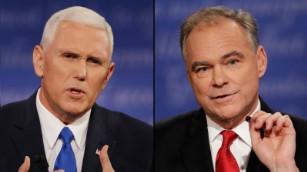 Farmville, Virginia (CNN)For one night, Mike Pence put a calmer, gentler face on the 2016 Republican ticket. And Tim Kaine's pestering style helped him do it.

But the Indiana governor's big night in Tuesday's vice presidential debate might not transfer to his running mate, Donald Trump.

Kaine -- Hillary Clinton's number two -- spent his night throwing all of Trump's most politically damaging lines at Pence and asking him to explain them. For the most part, Pence passed, dismissing his "pre-done lines" and "insult-driven campaign."

Here are five takeaways from the vice presidential debate:

The Indiana governor -- once a self-styled "Rush Limbaugh on decaf" radio host -- was in full talk-radio mode Tuesday night.

Kaine, meanwhile, should switch to decaf.

His interruptions -- one after another after another -- were so distracting that it often detracted from the substance of the debate and made policy conversations hard to follow.

The Virginia senator was trying to mimic Vice President Joe Biden's style against Paul Ryan in 2012 -- but Kaine can't pull off lines like "malarkey." And Pence, who honed his skills reacting calmly to angry callers on his radio show, knew exactly how to deal with it.

An unflappable Pence benefited from the contrast and won the night -- with 48% of those who watched it saying he had the best night, compared to 42% saying Kaine won, per a CNN/ORC poll of debate viewers.

But Kaine gets in hits against Trump

Kaine was determined to spend the night throwing out as many of Trump's controversial and incendiary remarks as possible, hoping that some would sink in for the large audience watching Tuesday night.

And at the same time Pence was accusing Clinton and Kaine of running an "insult-driven campaign," Trump was on Twitter, attacking Fox News host Megyn Kelly and retweeting supporters who said Kaine looked like a "fool" and an "evil crook out of the Batman movies."Kaine spent much of the debate lobbing Trump's own words at Pence.

At one point, Kaine accused Trump of "shooting himself in the foot" by attacking a Latina former Miss Universe; claiming to know more than the generals about fighting ISIS; trash-talking Sen. John McCain's military service; supporting a "personal Mount Rushmore" of dictators and believing "the world will be safer if more nations have nuclear weapons."

Trump had indeed said those things.

Pence deflected, saying Kaine's attack had "a lot of creative lines in it."

And Kaine shot back: "See if you can defend any of it."

The vice presidential nominee split -- sometimes in big ways -- from the top of his own ticket.

The most glaring example: Russia.Pence called Vladimir Putin a "small and bullying" leader -- and denied that Trump has praised Putin, even though Trump has offered kind words about the Russian president throughout the entire campaign, repeatedly labeling him a "strong leader."

Kaine also reminded Pence that he praised Putin as well. Pence told CNN's Dana Bash last month that it was "inarguable" that Putin is a stronger leader than President Barack Obama.

He also suggested the United States "should be prepared to use military force" against the Syrian government if Russia doesn't stop supporting President Bashar al-Assad's regime.

Pence also said that "what America ought to do right now is to immediately establish safe zones" to protect Syrian refugees -- a departure from Trump, who has praised the idea of safe zones but put the burden on Middle Eastern countries to establish and maintain them.

The major policy splits between Trump and Pence pose a series of new questions about their foreign policy that could dominate the next week -- and become the most important result of the vice presidential debate.

Pence displayed a discipline that Trump did not in the first presidential debate: He didn't take the bait.

When Kaine threw a litany of attacks on Trump in Pence's direction, Pence often scoffed, batted them away and moved on -- never addressing them directly, never helping Kaine to make Trump's most incendiary words sink in. And always turning the conversation back to Clinton.

The problem: Part of Pence's role is defending Trump.While Tuesday night's debate helped Pence, it's not clear that those gains will transfer to Trump.

Post-debate, social media was abuzz that the debate was Pence's 2020 coming-out party. The ambitious Indiana governor eagerly attacked Clinton, but by often letting Kaine's attacks on Trump go untouched, he did nothing to ease the political challenge those criticisms have posed for Trump's campaign.

But did Pence do too well?A senior Trump campaign aide told CNN's John King: "The media is saying Pence won, but didn't really defend Trump. That isn't sitting well with the boss."

Trump was frustrated by the reviews after his first debate with Clinton. A long-time Trump friend said, "what I worry about is him hearing Hillary Clinton and Mike Pence are better debaters than him. That isn't what he likes to hear."

And when Kaine attacked Trump's June 2015 remarks that Mexican immigrants are "rapists" and "criminals," Pence -- in a remark that could deepen the campaign's trouble with minorities --complained: "You've whipped out that Mexican thing again."

America learned nothing about the VP candidates

Vice presidential debates are proxy affairs -- all about defining and defending the top of the tickets.

So the political histories of Pence and Kaine weren't mined at all.

That moderator Elaine Quijano of CBS was uninterested in the would-be veeps' backgrounds was clear when the topics of trade and gay rights never came up.

Sticking firmly to script, Elaine Quijano loses the debate Both have flip-flopped on the Trans-Pacific Partnership -- ditching their support for the 12-nation trade deal to embrace Trump and Clinton's opposition to it, without ever offering detailed explanations for their reversals.

Pence signed a "religious freedom" law that set off a national debate about what should happen when LGBT rights and business owners' religious beliefs come into conflict. He wasn't even asked about it — and Kaine didn't mention it either.

The night's topics and performances underscored that 2016 is really all about two of the most famous figures in American life: Trump and Clinton.

They'll be back in the spotlight Sunday night in St. Louis for the town-hall debate.