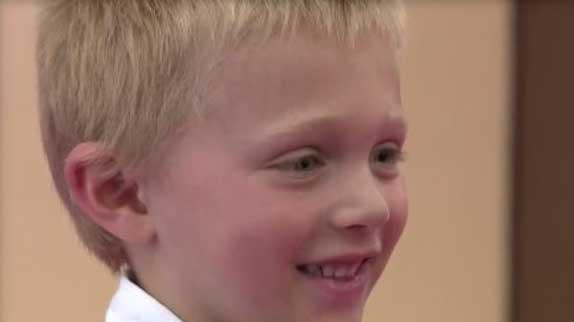 MISSION VIEJO, Calif (CBS NEWS).-- The little boy whose prosthetic leg was stolen in Orange County, California over the weekend, has proved not even thieves can slow him down.

Liam Brenes, 4, got his white Karate belt Tuesday -- two days after a thief stole his artificial limb that was left on the beach while he and his family went to explore tide pools at Crystal Cove State Beach, CBS Los Angeles reported.

The 4-year-old was determined to earn his belt first even if it meant kicking with his older, shorter prosthesis.

"Today, we were going to go look at getting his leg done, and he was devastated. His face just was so sad, and he refused," said the boy's mother, Amanda McFarland. "He was begging: 'Please let me go to Karate. Please let me go get the belt.'"

He got the belt, and soon will also get a new prosthetic.

With the help of some CBS Los Angeles viewers, several prosthetic companies, including one in Palmdale, California, offered to make Liam an artificial limb free of charge.

After getting his belt, Liam and his family headed to Essential Orthotics and Prosthetics in Palmdale, where he was fitted for a new leg.

"My job is to protect my child, and I feel like I failed," Liam's father, Frank Brenes, said as he fought back tears. "All the kindness and everything that people have reached out to do. Thank you. It's definitely helping me adjust with that."

Donations have also poured in, funds his mother said will be used to send Liam to a special kids camp for amputees. She said they plan on donating the rest of the donations to organizations that make prosthetics.