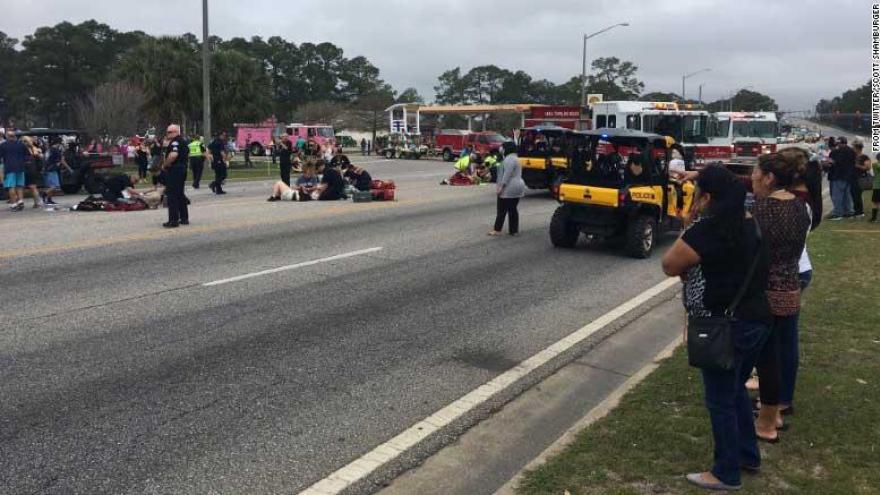 (CNN) Twelve members of the Gulf Shores High School marching band were injured, four of them critically, when a car plowed into the band at a Mardi Gras parade Tuesday in Gulf Shores, Alabama, city spokesman Grant Brown said.

Brown said the car was driven by a 73-year-old man who accelerated and hit the band. It was not immediately clear why the driver accelerated, but authorities do not believe the crash was intentional.

"Every indication is that it was a tragic accident by an elderly man," Gulf Shores Police Chief Ed Delmore said.

Brown said there was no indication that drugs or alcohol were involved.

A vehicle in a Mardi Gras parade in Gulf Shores, Alabama, plowed into a marching band from behind, sending several people to the hospital Tuesday.

At least 11 people have been injured, including three who were critically hurt, Gulf Shores city spokesman Grant Brown said. He said the parade has been canceled.

The cause of the crash was not immediately clear.

CNN affiliate WKRG said students were among the injured.

Angie Swiger, board member for the Baldwin County Board of Education, said all students in the parade have been accounted for.

"We've taken the students back to the high school that have not been checked out by parents, and we have accounted for everyone," she said.

Swiger said a crisis counselor is at a local high school to comfort students and parents who witnessed the crash.

"It's going to be a very difficult day," she said. "It is a tight-knit community. We just ask for everyone's thoughts and prayers."