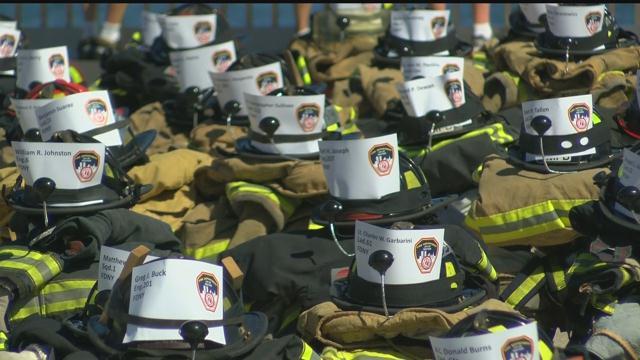 15 years after the terrorist attacks of September 11, Milwaukee and metro-area firefighters continued their tradition of honoring first responders who died on that day.

The tribute - called "Standing for the Fallen" - separates itself from other memorials by being almost entirely coordinated by local fire departments. One of its main goals is to impacting people visually to show the effect of the Twin Towers collapse.

Mid-afternoon a man parachuting with the American flag circled the Milwaukee County War Memorial - which was also the endpoint of a silent parade.

Just offshore a Milwaukee Fire boat shot jets of water into the air before the skydiver made a hard landing.

It's images like this that catch your eyes first: children running to gather the flag as bagpipes play in the distance.

Then your eye turns to something more subtle - a grid of gear. There's one pile for each of the 343 firefighters killed 15 years ago.

"It makes me like very sad because that is lot of helmets and gear for people and all those people had died and it's really sad," 11-year-old Bella Lipski said.

Lipski is a sixth grader. The attacks happened four years before she was born. But she's heard a lot about it, especially from her father who is a deputy fire chief in Milwaukee.

"When we do talk about 9/11 he tells me about like what he was doing on that day," Bella Lipski said.

"I was mowing the lawn in my backyard and I had a radio station on listening to some talk show and all of a sudden their whole focus shifted and i could tell something really, really extraordinarily bad had happened," MFD Deputy Chief Aaron Lipski said.

15 years later this group focuses on the firefighters and other first responders who went into those buildings. Aaron Lipski related his daughter's feeling on the day to what he feels about Pearl Harbor.

"I was not alive for that. I read about it in history books. I've seen documentaries on it. But I didn't feel that, that day. But I did feel this. So it's an interesting relationship to have with things," Aaron Lipski said.

"I'm just very thankful that he wasn't there when it happened and he wasn't one of the people who got killed," Bella Lipski said. "But I'm also very sad that some people did have to die on that day and that may people did lose their lives."

The same group is also promoting a blood drive happening at the Milwaukee County War Memorial on Monday starting at 10 a.m.