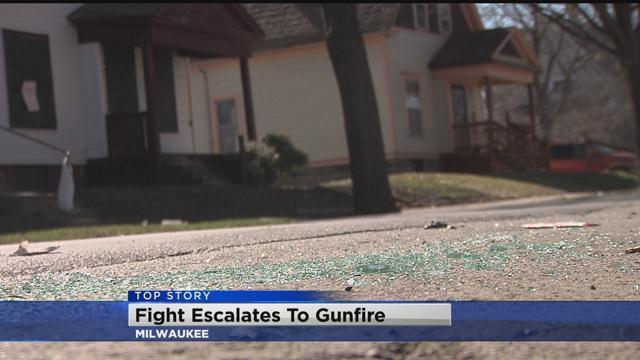 A three-year-old girl hit by a stray bullet Sunday evening is expected to survive her injuries, a spokesperson for the Milwaukee Police Department said.

No arrests have been made in connection to the shooting on the 2800 block of North 25th Street, authorities said.

A 17-year-old male was also injured during the shooting. Both he and the three-year-old girl suffered serious injuries but are in stable condition, authorities said.

TruMont Hardy lives across the street from where the shooting happened. He said he started watching from doorway when he heard the commotion.

"Over there I saw like people fighting and all that stuff. They hit the gate. Started shooting and all that. They were arguing about some dude cheating or something like that," Hardy said.

A spokesperson for Milwaukee Police said no one in the area called 911 and investigators only found out what happened after the victims showed up at local hospitals with bullet wounds.

Shirley Jordan walked through the site of the shooting on Monday morning. She was going to pick-up her four-year-old grandson. She said she grew up in this area but what happened on Sunday shocked her.

"It wasn't good then but I see the houses boarded up and all that kind of stuff and around on the next block. And it's a lot of kids in the neighborhood from what I can see," Jordan said.

Neighbors said they did not believe the victims were from the area.