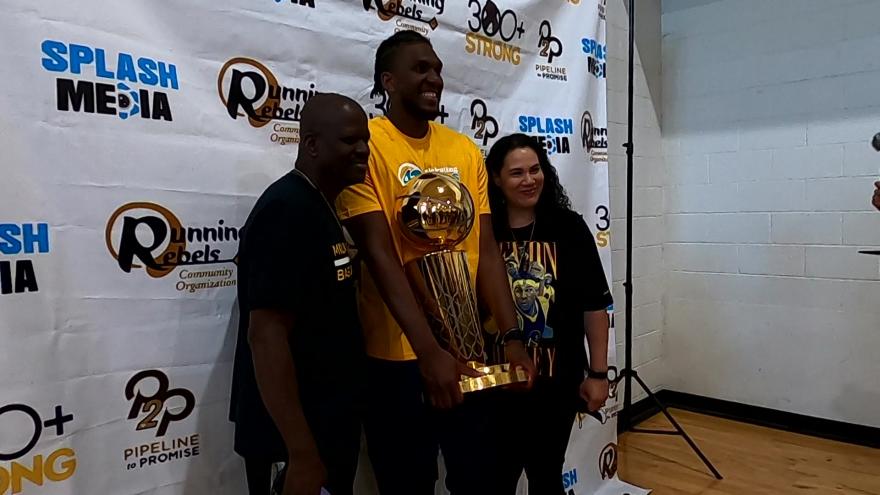 MILWAUKEE (CBS 58) -- Thursday, Aug. 11, young members of Running Rebels, a gang and drug prevention program on the north side of Milwaukee, had a special visitor drop in.

Kevon Looney, a Rebel alum and NBA champion, came back to his hometown of Milwaukee, and shared words of wisdom on how to score big on and off the court.

Looney was met with dozens of Running Rebels youth inside a newly constructed gym.

The three-time NBA champion walked to the podium and talked about the hope he has for the current Rebels.

After giving the inspirational speech, the Larry O' Brien was brought out -- escorted by two security guards, with a white-glove service.

Looney took pictures with the current Rebels and the famous championship trophy.

The champion says, he sees greatness in this next generation.

"I'm not the last person who's going to make it, we are going to have other kids make it in entertainment and sports, and go to college, and do other special things, I'm just trying to set the path and keep other people with me," said Looney.

Current youth of Running Rebels says this is just the start.

"The sky is not even the limit for anybody that walks through these doors, so I feel like it's definitely something that could be done, but this is just like the stamp that it's really happening," said Sierra Roberson, a youth member with Running Rebels.

In the gym of Running Rebels, Kevon Looney's name is printed on the floor and his jersey is hung high for all to see that anything is possible.