3 Shot at Florida State University before gunman killed by police 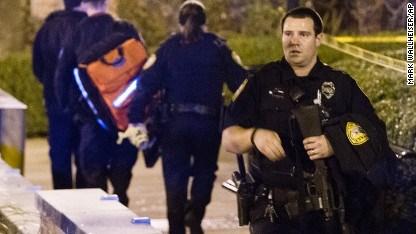 Florida State University students huddled together in the aisles of a packed campus library early Thursday after a gunman opened fire, injuring three.

Two of the shooting victims were taken to Tallahassee Memorial Healthcare. One was in critical condition; the other was stable, the hospital said.

The third victim was treated and released at the scene.

All three are students.

Campus officers later shot the gunman to death after they asked him to drop his handgun, and he opened fire at them, authorities said.

\"This is an isolated incident and one person acting alone,\" Tallahassee police Chief Michael DeLeo said later. \"There's no indication of any further threat to anybody.\"

\"Obviously everyone wants to know why,\" DeLeo added. \"That's the hard answer we're going to continue to investigate.\"

Officials would not say whether the gunman was a student. The five officers involved in the shooting were placed on routine paid administrative leave.

The shooting started shortly after midnight either inside or near the library at the school in Tallahassee. The library is open 24 hours.

\"The library was packed,\" said Mary Coburn, the vice president of student affairs. About 300-400 students were inside, studying for final exams.

\"If there's any positive news we can take from this occurrence is that the victim count was not greater,\" said the city's Mayor-elect Andrew Gillum.

The school sent out a text to students, warning them to take refuge and stay away from windows.

Students shoved tables and book shelves against doors to barricade themselves.

'The entire campus is empty'

A cell phone video posted online -- purportedly from inside the library -- showed students sitting in library aisle listening intently to a voice over the loudspeakers.

\"There has been a shooting in the library,\" the voice says. \"Stay where you are. We will be coming to each floor and clearing and taking care of anybody.\"

Perry Kostidakis, a sports editor for the campus newspaper, told CNN the library was surrounded for a time.

\"The entire campus is empty; I've seen one or two people come up and look at the scene. Everyone who is in a campus building is under lockdown right now. Policemen are still surrounding the library.\"

'It was very scary'

Graduate student Alex Lauren said students were escorted from the library to the first floor of a nearby building, where they continued hearing gunshots. They were told to wait for a bus to take them away from campus as armed police stood nearby.

\"It was very scary ... I'm more heartbroken more than anything else,\" she said. \"It's sad, my heart goes out to the people affected.\"

Florida State is one of the top research universities in the nation. It has about 40,000 students spread out in various campuses in the city, and is also considered one of the nation's top-ranked football teams.

As the incident unfolded, anxious students sent tweets and text messages to loved ones.

\"There's a man with a gun in the library,\" Samantha Sillick said in a text to her father. \"I love you.\"

In the aftermath of the shooting, FSU canceled all Thursday classes and testing, the school's Twitter account said.

\"The Florida State University community is extremely saddened by the shootings that took place early this morning at Strozier Library, in the very heart of campus, and our thoughts and prayers are with the families and loved ones of all those who have been affected,\" University President John Thrasher said.