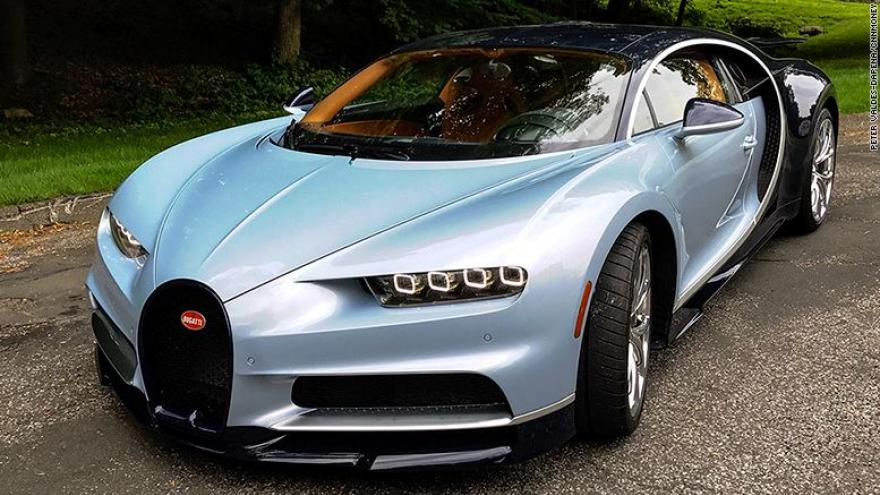 (CNNMoney) The Bugatti Chiron doesn't cost $3 million just because it has a 1,500 horsepower engine, a zero-to-sixty time under 2.5 seconds and a top speed over 260 miles an hour.

It's the fastest street-legal passenger car in the world, but what's really impressive is that it still looks so good.

Think about it: If someone had just listed all those numbers would you still expect the car to look pretty? When the goal is pure speed, visual aesthetics usually take a back seat -- way, way back. So does comfort. And driveability. The car would have wings sticking out all over, massive air vents and a tiny, cramped passenger cabin.

But that is what's so amazing about the Bugatti Chiron. It isn't just catapult-quick. It's beautiful. And it actually drives like a normal car.

Yes, it only seats two -- but in relative spaciousness and comfort, and in remarkable taste. Every surface is covered in leather. A metal spine runs up the center and curves around into the roof, parroting the metallic curves on the outside of the car.

There are no large computer screens inside, only tiny round ones that fit inconspicuously inside knobs. Bugatti wants this car to be enjoyable decades from now and computer interface design ages about as well as cottage cheese, so there is almost none of it inside the Chiron.

From the outside, the French-built Bugatti is an artistic exhibition of curves flowing into and out of other curves. There are, indeed, enormous air vents. They're needed to cool the huge engine and to feed it the enormous quantities of air needed to make 1,500 horsepower. The vents are housed within big swirls just behind the Chiron's side windows.

And there is, indeed, one large wing that rides out over the back of the car. It raises, lowers and changes its angle depending on the needs of the moment, such as how fast the car is going or how quickly the driver is trying to slow down.

Sit inside, pull back the shift lever, and off you go. It's that simple. Then you just take it onto the highway, find some open road ahead, and hit the gas. No, you're not going to get anywhere near the Chriron's top speed but, even so, that sound! Sixteen pistons banging out a rapid fire drumroll, four turbochargers sucking in air by the gallon. Your back is pinned to that expensive leather seat.

But, at the same time, it's weirdly calm. The steering wheel's not twisting in your hands. The tires aren't screaming for want of traction. You're just going very, very fast. And it's so easy.

Very soon, it's too fast. So you let up on the gas pedal.

Whoosh!! That's the rushing sound of exhaust gases that had been pushed to the turbochargers being redirected straight out the exhaust pipes, instead. The Chiron begins to slow. At the same time, the pressure eases off your chest and you can breathe again.

The noise, the acceleration, that gorgeous body. That is what Bugatti buyers are getting for $3 million.

Now that we're seeing the performance potential of electric cars, my bet is that the Chiron is the last such car we'll see. For a few more years, and for just $3 million, you can buy the internal combustion era's awesome grand finale.