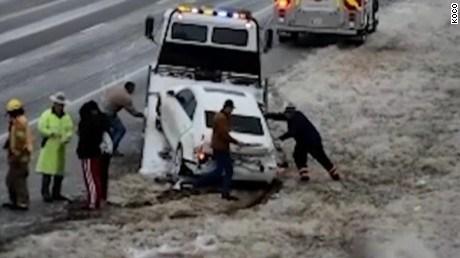 (CNN) Flooding has led to three deaths in the Dallas area after severe rains, authorities said Saturday -- part of a wintry storm system that is leaving tens of thousands without power as it hits the central Plains to the north.

More than 7 inches of rain have fallen in the Dallas area from Friday into Saturday morning, leading to widespread flooding, and more rain is expected into Sunday.

The flooding led to at least three deaths, including one in Garland, northeast of Dallas. Benjamin Floyd, 29, was unable to get out of his vehicle before it was submerged Friday, Garland city officials said. The two other flooding deaths came in Johnson County, south of Fort Worth, county emergency management officials said.

Driver missing; sheriff's deputy holds on to tree for hours

At least one other person was missing and presumed dead in Tarrant County, a situation that led to the dramatic rescue of a sheriff's deputy who got caught up in floodwaters while trying to save her.

A vehicle carrying the 70-year-old woman was swept away by floodwaters there Friday morning, sheriff's department spokeswoman Terry Grisham said.

During an attempt to rescue her, sheriff's deputy Krystal Salazar got caught in the surging waters and had to hold on to a tree for two hours. Salazar was rescued, Grisham said.

Emergency crews in Texas were on standby Saturday in case the rain led to more flooding. Rescue boats were ready in Johnson County on Friday night, and crews from the Texas Department of Transportation were checking high-water hot spots and other places vulnerable to flooding, according to CNN affiliate WFAA.

The rains affecting Dallas were part of a system that was leaving dangerously icy travel conditions to west and north Saturday, from western Texas through Oklahoma and Kansas. Freezing rain was expected from Amarillo, Texas, to just west of Kansas City.

As of Saturday morning, ice storms have left nearly 60,000 people in Oklahoma City without power, according to power company OG&E's Twitter account. Downed power lines have been reported in nearly every community across central Oklahoma, CNN affiliate KOCO said.

About 2.5 million people were under an ice storm warning Saturday morning, including residents in the Oklahoma City area.

Another 4 million people were under a winter weather advisory or freezing rain advisory.

"We had to let off the acceleration, because we all got to sliding," truck driver Field Barnes told KFOR on Friday of the drive he was making west of Oklahoma City.

Flash flood watches were in effect for 11 million people from Texas to Missouri. One, for much of North Texas, is schedule to expire at 6 a.m. Sunday.