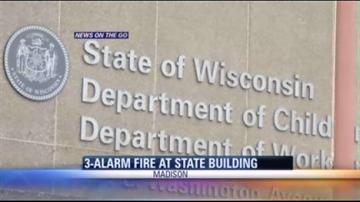 Officials say the scene began as a smoke investigation at the Department of Workforce Development on Washington Street.

Firefighters reported heavy smoke upon arrival, but weren't immediately able to locate the fire in the large building.

Madison Fire Chief Steven Davis said the heavy smoke made it extremely difficult for firefighters to find the fire.

A second alarm was called just after 2:30 a.m. and firefighters continued searching the building for the smoke's origin.

The fire was soon upgraded to a third alarm.

Firefighters found flames in a cubicle on the fourth floor of the building and were able to knock the fire down.

Investigators remain on the scene.

The GEF1 building will be closedFriday to the public and all Department of Workforce Development and Department of Children and Family state employees.

All other state building are open.

Stay tuned to CBS 58 for the latest updates.